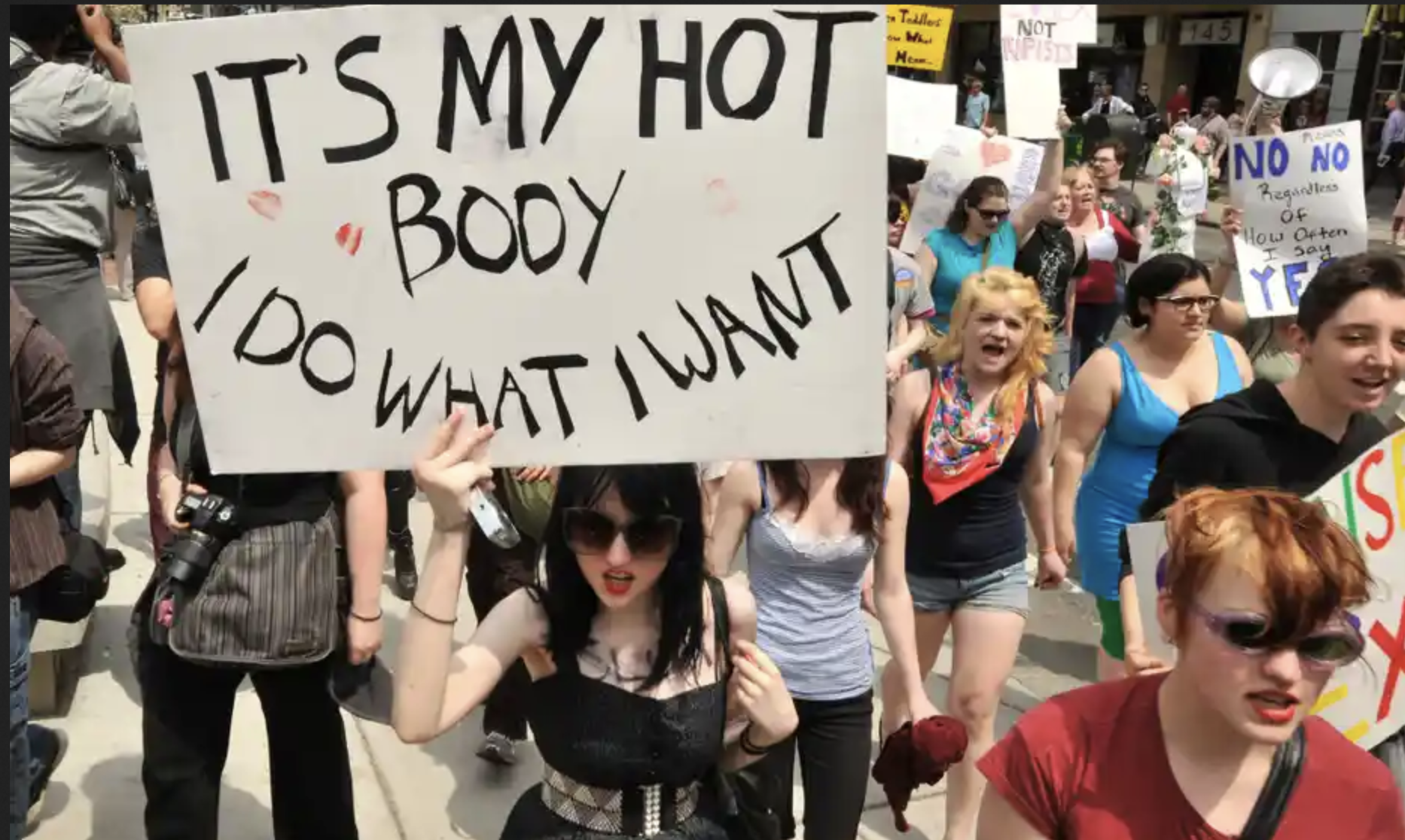 We, in feminist land, like very much to encourage folks (particularly media-type folks, as they have a pretty significant role in framing discourse) to use correct language. Or, at very least, language that describes something real. In my last post, for example, I talked about the fact that many mainstream news sources reported on the murder of Kasandra Perkins without ever using the words ‘violence against women’ or even ‘domestic abuse’. Feminists know that naming the act and the perpetrator is important lest systemic inequity and the fact that we live in a sexist society disappear into the ether. It’s hard to address misogyny if we refuse to acknowledge that it exists and shapes our lives. Language matters.

As such, I would like to address a newfangled term that has mushroomed in popularity like an idiot weed due to funny fun-times Slutwalk and other “WE DO WHAT WE WANT FUCK YEAH” feminismish happenings. That term is “slut-shaming.”

I implore you, friends of feminism, language, and logic: stop saying “slut-shaming.” It doesn’t mean anything. It’s misleading. And it makes you all sound ridiculous.

Now, before you start explaining to me why slut-shaming is actually a real thing, allow me to stop you. I understand what it is you are trying to get at. I myself have experienced this “shaming” many a time. I know all too well about the double-standard that won’t die. The one that makes promiscuous women ‘sluts’ and promiscuous men into “pimps.” (Get it, boys? Being a “pimp” is a good thing.) And you don’t even have to be ‘promiscuous’, whatever that means. It’s a thin line, for women, between love and hate. One minute you’re revered, you’re beautiful and precious and desirable andandand…. the next, you’re in the gutter. Women lose their sheen quickly. That’s what happens with commodities. You’re worth is in the hands of a fickle and punitive market.

Like you, I am sick as fuck of being treated like shit while men brag and boast about their “conquests,” shaming the very women who trusted them for doing just that: trusting. Silly girl. Trust is for amateurs. You’ll get your comeuppance.

Yes. I agree that this is bullshit.

Being called a slut is painful. It sticks with you. I know.

Even now, as a bonafide adult, when I should really not have to deal with this crap, I still do. I still feel there’s an expectation that I play the chaste game. That, while men can pretty much act on any impulse, I will be judged for my behaviour. Masquerading as a classy lady is work. I do my best, but the end I usually just do what I want. What other people want obviously has less bearing on my choices than what I want. If that weren’t the case I’d likely have some kind of stable job, a better credit rating and a practical degree. Regardless of my stubborn hedonism, somewhere in the back of my mind there is always a tiny voice yelling “SLUT!” Residual trauma I’m guessing.

So please, spare me the lecture on the sexual double standard. I’ve lived it and been punished by it for half my life. By men and women alike.

Yet still I cringe every time I hear someone talking about ‘slut-shaming’. As such, I’ve compiled a list of  reasons that describe why I feel this term is stupid and should go away forever:

1) There’s no such thing as a slut. Can we please stop pretending there is? ‘Slut’ is a word used to shame and silence and attack women. It is only a real thing to misogynists who use language to hurt women.

2) The solution to the sexual double standard that shames women for having casual sex, being promiscuous, enjoying sex, having female bodies, leaving the house, whatever,  is not, as a very smart lady on Twitter put it recently, to “turn ‘sluts’ into a special-interest group“. You see, there is no such thing as a “slut” or a “non-slut.” There are women. This whole “slut-pride” thing and terms like “slut-shaming” reinforce the very dichotomies feminism works to destroy. Us vs. them. Good girls vs. bad girls. Reinforcing the idea that some women are ‘sluts’ and that ‘sluttishness’ is attached to female sexuality (i.e. that whole — now “slut” means a “woman who likes sex” crap) is not useful in terms of defining our own lives and sexualities. Like sex, don’t like sex, whatever. You aren’t a “slut” either way. You’re a woman.

3) ERGO. “Slut-shaming” isn’t about shaming “sluts.” It’s about misogyny. It’s about shutting women down. It’s about hating women. It’s about silencing. You can be labelled a ‘slut’ regardless of whether or not you have or like sex. Whether you’ve had one partner or fifty. It’s doesn’t matter. Just like women get called bitches regardless of their behaviour. Do we go around telling people not to “bitch-shame” us? No, we say that men who call women bitches are sexist assholes who don’t like it when women speak (read: exist).

4) No matter how hard you try to take back “slut,” people will still use it to shit on  you. And it still won’t feel good. Just because you’ve painted “slut” across your chest and proudly tromped down the street in fishnets doesn’t mean that assholes across the continent are going to stop using sexist language. A lot of people like to make comparisons around “taking back” the word “slut” to the n-word. But, as we all know, racists still use this word in a racist way. Because they are racist and because racism is a thing that still exists in our world. You can pretend that in the last year “slut” has been taken back to mean “awesome-fun-times-sexy-lady,” but it’s not true.

The point I’m trying to get across here is that this language is confusing and, rather than take apart virgin/whore, good girl/bad girl dichotomies and rather than address the root of the “slut” language (which is misogyny), “slut-shaming” skirts around these things.

Not only that but the supposed reclamation of this language has served to reverse these dichotomies in a decidedly unhelpful way. So now, the “good girl” is no longer the prude. She is the girl who like to have tons of sex (with dudes). She’s liberated. This is awesome for patriarchy because it provides more soldiers in the “feminists are prudes who hate sex” army. It means that women who don’t like sex (with men, in particular) don’t have valid opinions. Because they’re just maaaad. (Or they have their periods or something. Who really knows.) This phenomenon is also referred to as “compulsory sexuality.”

So, Salon published a whole article the other day about a study that shows “the sexual double standard is alive and well and still influencing women’s everyday behavior.” Well, fucking duh. Any woman who exists in this world is well fucking aware that she’s always on the verge of being called a slut or a bitch or a cunt or a whore. Because that’s just not something that’s avoidable in our culture. If you turn down a date you might get called a bitch. If you have sex on a first date you might get called a slut. If you get in a fight with your boyfriend because he’s a dickbag, you might get called a whore. I’ve been called a slut for not having sex with someone I did not want to have sex with. So go figure. Either way, women lose. Your being called a bitch or a cunt or a slut or a whore has nothing to do with you actually being any of these things. Frustratingly, the article was entitled: “Study: ‘Slut-shaming’ won’t go away”.

Regardless of the problematic headline, the study highlighted is a good study. The research was lead by Terri Conley who we like very much here at Feminist Current because she busts crap-o evolutionary psychology myths that try to justify sexist stereotypes about male and female behaviour à la “Men love sex with everybody all the time! Women hate sex and also want to make babies all the time!” variety. In this new study, Backlash From the Bedroom, the researchers find that, “under the right circumstances — that is, when the experience promises to be safe and pleasant — women are just as likely as men to engage in casual sex.”

Key words: safe and pleasant. It’s more difficult for women to have casual sex, not because they, as a universal group, necessarily don’t desire it, but because women live in a world that is neither safe or particularly “pleasant.” I’m not saying that if we lived in an equitable society free of sexism and the threat of violence all women would be having casual sex all the time, but I am saying that what we need to understand about men and women and sex is that universalizing based on solely on evolutionary psychology that ignores cultural and social contexts is dumb.

Conley and her colleagues also found that, “Women who accepted a casual sex offer were viewed as more promiscuous, less intelligent, less mentally healthy, less competent, and more risky than men who accepted the same offer…”

And indeed! This is a true thing. Because of sexism. Calling women “sluts” is about controlling women.

I mean, lets break this down. Say you engage in consensual sex with some dude. Afterwards, say he feels good and you feel bad. What the hell, right? It felt good at the time, yeah? Often, this man is the one that makes you feel bad. Often he does this on purpose. What the fuck? Why should you feel bad about engaging in consensual sex with a person you were attracted to? Well, for one, because dudes can be fucking assholes. For two, patriarchy doesn’t want women to feel good about themselves. Feeling bad means boob jobs and Girls Gone Wild and faking orgasms. Feeling bad means trying to please men above all else. It means you’ll keep reaching for this thing you can never have. Because pleasing men will never give you real power.

Hate yourself, patriarchy says. Do it. Do it because the man who sleeps with you and then turns around and makes you feel like a worthless, insignificant, scummy, piece of shit subhuman because his ego needs that in order to survive — he hates you.

Have you ever had sex with someone to punish them? I haven’t. But I sure have been fucked as punishment.