Hulu’s The Handmaid’s Tale, on the other hand, is a terrifying “fictional” account of a patriarchal dystopia, where women cannot hold jobs or own property, and serve as either breeders, cleaners and cooks, or trophy wives. Those who resist are exiled to toxic waste dumps or worse. Atwood has asserted many times that her book, on which the series is based, is not really fiction — she drew inspiration from accounts of how women are actually treated around the world.

So while HGWTO purports to show how we can beat men at their own game, The Handmaid’s Tale portrays how men beat women into submission. The contrast seems stark.

But in reality, both shows have a common underlying theme: that women’s true role is to be fucked. In HGWTO women are fucked to make money; in The Handmaid’s Tale women are fucked to make babies. Both narratives convey a form of biological determinism; that women are subordinate sexual vessels whose primary purpose is to serve the needs of men. And in both shows, it is women who, in the name of sisterhood, do the dirty work of men by playing the role of taskmasters to control the lives of other women.

It was stomach churning to watch Lust manipulate and cajole Monica into making this film, and lying through her teeth as she explained that she is doing something different from the boys. Despite all the talk about aesthetic value and women’s sexuality, HGWTO is just a clever piece of ideological propaganda. Lust, just like the boys, is making money from sexually exploiting women; unlike the boys, she wraps herself in a feminist flag as a way to differentiate her brand in a glutted market.  In Lust’s world, sisterhood is powerful because it provides cover to pimp out women in the name of feminism.

Lust’s duplicity would fit perfectly into the Republic of Gilead, the fictional country in The Handmaid’s Tale. The Handmaids are sent to a kind of patriarchal boot camp run by “Aunts,” who do the dirty work for the men. The Aunts manipulate and cajole the Handmaids into believing  that they are on their side, by training them to fulfill their god-given roles of producing babies. Of course, should a Handmaid step out of line, there is always a handy cattle-prod nearby that the Aunts use to shock the Handmaids into submission. And when the Handmaid fulfills the duty of reproducing, then there is a sisterly hug from the Aunt.

In one telling scene in The Handmaid’s Tale, the narrator tells us that she can’t trust anyone, including  other Handmaids, because they could be agents of the state.  As feminism becomes increasingly watered-down by a neoliberal ideology that rebrands the sex industry as female sexual empowerment, we have to ask: Has our movement been colonized and hijacked to the point that it is now the Handmaiden of patriarchy? 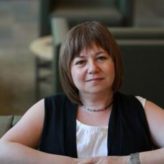