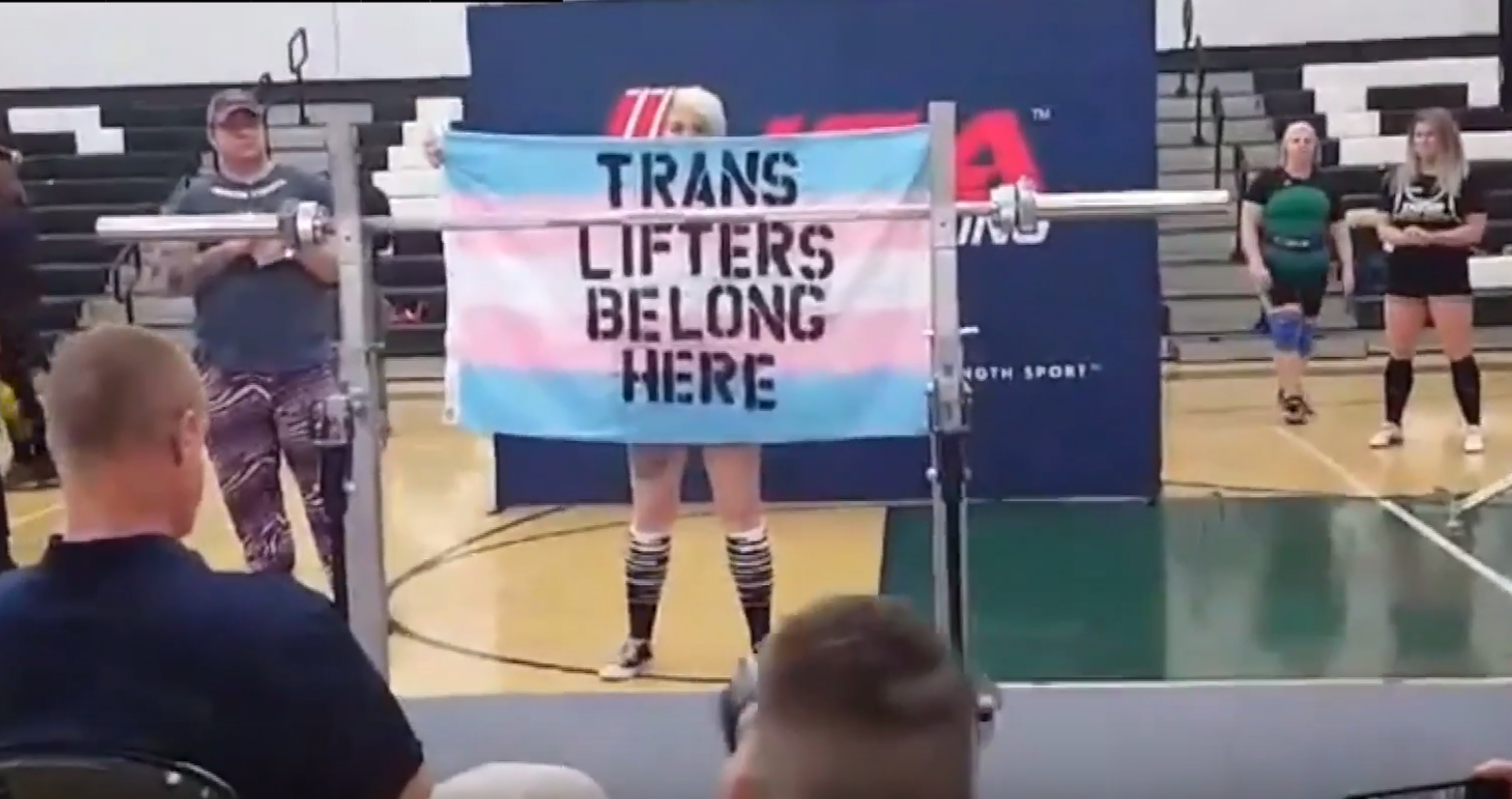 I’ve wanted to enter a USA Powerlifting meet for some time now, and this year I finally did it. For about two years I have hit the gym one to three hours, five to six days a week, and have stuck to a strict nutritional plan by counting every calorie and macronutrient, and scheduling my meals. The training was grueling, and balancing it with caring for my family required as much or more discipline than lifting the weights.

After competing in some small local events, I finally gained the courage to sign up for the USA Powerlifting Minnesota Women’s State Championships. Leading up to it, I faced several personal setbacks. I almost lost my dad due to diabetes complications. I then lost my most cherished supporter: my grandmother. This was followed by a very unexpected and painful miscarriage. There were times I wasn’t able to train, but after every setback I found myself back at the barbell.

One of my favourite sayings is, “There is a beast inside of every woman that unleashes when you place a barbell in her hands.” That’s what the sport has done for me and that’s what I hope for other women. While pushing my body to lift over 300 pounds off the ground my mind grew strong as well. I no longer have the panic attacks that used to cripple me. Powerlifting empowered me.

But, to my surprise, the event I had been dreaming about and working so hard for was jeopardized by controversy. After setting a new state record in women’s bench at the United States Powerlifting Association (USPA) Minnesota State Championships, JayCee Cooper’s application to compete in the women’s division at USA Powerlifting (USAPL) was rejected. This was on account of a policy enacted by the organization banning males from competing as women. Rumours of protests at the USAPL Minnesota Women’s State Championships were rampant online. Trans activists wrote a letter to the USAPL Executive Committee demanding an immediate policy change. In a letter to USAPL President Larry Maile and Executive Director Priscilla Ribic, Minnesota congresswoman Ilhan Omar said it is a “myth that transwomen have a ‘direct competitive advantage’” and even threatened legal action on behalf of Cooper, who identifies as transgender. It became clear that the event was being commandeered by activists. I had no idea what to expect, or what I should do or say. I felt heartbroken and alone, as speaking out in support of women-only sports competitions is often deemed transphobic these days.

Abigail Shrier, a journalist who writes for the Wall Street Journal, was slandered on Twitter after discussing biological differences between males and females during a Fox Nation panel featuring Cooper and trans-identified male cyclist Rachel McKinnon, who won a women’s cycling world title. McKinnon also went after Olympic athletes, Sharron Davies, Paula Radcliffe, and Kelly Holmes, similarly accusing them of “transphobia,” and even attempting to force their sponsors to drop them. All this because these female athletes — champions and record holders in their respective sports — spoke out in defense of women’s sport, and the unfairness of making women compete against men. Athlete Ally, a nonprofit LGBTQ athletic advocacy group, dropped tennis legend and lesbian Martina Navratilova from their advisory board after she said men identifying as transwomen to compete against females was “cheating.” This harassment doesn’t stop at athletes. On Twitter, McKinnon said all “cis people” should “die in a grease fire.” Twitter temporarily suspended McKinnon’s account, yet within hours of the threat, it was reactivated.

The thought of speaking up was scary, but after spending countless hours and sleepless nights researching gender identity ideology, biology, sports, and transgenderism, I felt I had no other choice. I contacted USAPL Minnesota state chair, Joe Warpeha, and told him I was concerned about the possibility of protesters the safety of the event. He assured me that, while there might be a few silent protesters, everything would run smoothly.

Despite these assurances, I no longer felt the event would be a safe place for my biggest supporters — my mother and son — to cheer me on. I even wondered if I should still compete. After seeing the backlash online, I felt silenced by fear, and trapped in a situation that I never thought would be reality.

I was shocked when I arrived at the competition to find only 82 competitors out of the 120 that had signed up. This is unheard of, given the rising popularity of the sport. Fourteen of those women supported Cooper by “timing out” at the bar — standing in silence on the platform instead of lifting — while protesters gathered around them, clapped, and chanted, “Share the platform,” during the full minute lifters are allotted to attempt the lift.

In powerlifting we perform three lifts: the squat, bench, and deadlift. At competitions, we get three chances to attempt each lift. The best of each lift creates your lift total and is entered into a formula that considers age, weight, and sex to determine the winner. This gave the activists nine opportunities to protest, which most took full advantage of, and resulted in well over 90 minutes of disruptions. With two platforms of competitors lifting at the same time, the disturbance carried on regardless of whose turn it was. The unsportsmanlike behaviour ruined the event.

This definitely was not the silent protest I expected, and I was devastated. Unlike baseball, hockey, or other sports where, if you don’t do your best, there is still another game to go to the next day — a second, third, and fourth chance —  in powerlifting, it will take weeks or months before my body is ready to compete again. My mind is another story.

When the USAPL, a federation that enforces strict drug and testosterone-level testing, introduced a participation policy regarding transgender athletes, they cited two areas of concern: the use of testosterone and the physical advantages that male to female transgender athletes gain over women during puberty — advantages that remain even if the athlete transitions via surgery and hormones. The policy states:

“The [International Powerlifting Federation] Medical Committee, while respecting the rights of those who choose to transition, has been consistent in its opinion that use of testosterone and participation of male to female transgender athletes in our sport compromises fair play.”

Organizations like the USAPL have the right to create their own standards under these guidelines, and I believe USAPL is on the right side of history, as preventing men from competing in the women’s division in powerlifting defends women’s right to fair play.

Not all competitions are so strict about drug testing, and the USPA competition wherein Cooper set a new state record, lifting a total of 150 lbs more than the woman who would have otherwise won the championship, allows the use of performance enhancing drugs.

Ironically, trans activists are demanding fairness, but are not considering the way their actions are unfair for female competitors like myself, as well as spectators and volunteers. These activists did not show respect, professionalism, or courtesy in their protest — all core aspects of the code of conduct that USAPL members pledge to follow.

When I and several others expressed our disappointment about the ambush protest on the official Facebook group for USAPL Minnesota members, those who participated in the protest said our feelings were transphobic, petty, bigoted, and even racist.

Trans activists demand we accept their feelings as science and attack basic biology at its core. Ironically, their activism invokes the fear they seek refuge from, in the very group they demand inclusion in. They claim to be victims of bullying, yet they bully women incessantly.

Online harassment of those who speak up for female athletes is pervasive. After starting a website advocating for the preservation of biology-based eligibility standards for participation in women’s sport, I received an email telling me to drown in my own blood. But thanks to women like Navratilova, who is continuing to defend women’s sport, despite continued push back and online attacks, I and other athletes around the world feel emboldened to speak up.

My perspective isn’t religious or political — it is based on my experience and on scientific facts. Women should not be forced to compete with men. We have worked for generations to carve out the space we have in sport today, and we owe it to those women who fought for what we have today, as well as future generations of women and girls, to preserve female athletics. “Inclusion” might sound nice, but it could mean the demise of women’s sports altogether. If we allow men who identify as female to compete in women’s sports, there will be men’s sports and there will be co-ed sports, but women’s sports will cease to exist.

This is why I am fighting to save women’s sports.

Beth Stelzer, MLT, ACE-CHC is a small-town mom, housewife, and entrepreneur. She is a survivor of domestic violence and stalking who went from lab rat to gym rat. She’s a health coach, amateur powerlifter, unscripted activist, and founder of Save Women’s Sports.