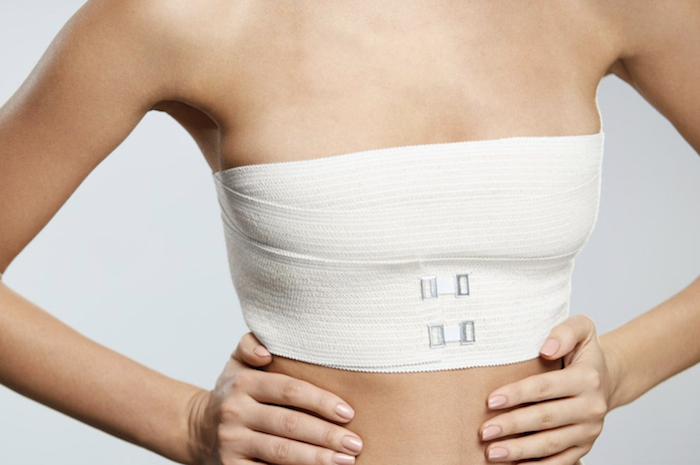 Two months ago, I had a breast reduction. After years of teasing, struggling to keep up in sports and gym class, waking up with a crick in my neck every morning, and hiding behind minimizer bras and turtlenecks, I decided to undergo a bilateral reduction mammoplasty in hopes of decreased back and neck pain and pain-free exercise. For me, getting the actual surgery was far easier than making the choice to do it. As excited as I was to be able to run without my breasts hitting my neck and to be able to walk into any old clothing store and find my size, I was afraid to leave behind a part of my body that had been with me since puberty and shaped much of my identity. I started developing relatively early, and as a result, my breasts have vividly coloured my childhood and adolescent experience.

In Grade 3, my chest began to match the pictures of breast buds in the puberty guides my mother had given me. As soon as I started developing, I became subject to playground gossip about breasts, bras, and everything in between. Essentially, I became “the girl with the boobs.” Boys would whisper and make snide remarks behind my back, but the girls were often bolder in their chatter. “Oh my gosh, you’re so big,” they would say to me. “I’d never want to be like that.”

In middle school, the fact that I had to change into a sports bra in gym class and my regular bra was much larger than everyone else’s made me the laughing stock of the class. Looking back, I’m disappointed that those who should have supported me (other girls) were often my chief bullies. I wonder if they were afraid of puberty and the implications that growing up has for girls and young women…

Shortly after I began developing, my mother began monitoring the clothes I purchased, in case any men or boys at church or school thought I was trying to get them to look at me. Uniform shirts were purchased a size too big, spaghetti straps were a hard no, and two-piece swimsuits were strictly off limits. I understand that this was an effort to protect me from sexualization, but I can’t help feeling as though my childhood was cut short.

The first time I remember being looked at inappropriately, I was nine years old. I was on vacation with my family, standing by the pool, when my mother leaned over and told me to cover up because a grown man old enough to be my father was staring at me. The old man by the pool was not the last to ogle me. As a preteen, I would find myself wondering if the boys talking to me would ever look me in the eyes. Several years later, while working at a shoe store, male customers often stared at my breasts when they thought I wouldn’t notice. These experiences might seem mild when there are others who have been through far worse, but at the time it made me feel exposed and vulnerable.

Despite the constant unwanted attention, as a teenager I believed there were upsides to having a large chest. I never once looked at myself and worried that I was too flat or that guys wouldn’t like me because of my size. My chest closely resembled what countless push-up bra advertisements presented as “ideal.” When my friends complained about their small breasts, I would inwardly rejoice that I didn’t have the same problem. Conforming to our culture’s beauty standards served as a warped source of confidence for me and a defence against the voices of my childhood bullies. What I didn’t yet realize was that you simply cannot win in a patriarchal beauty culture.

The first time I remember thinking there was something wrong with my breasts, I was 14 years old, standing in a mall, wondering why my breasts didn’t stand up like the mannequins’. When I got home, I scoured the internet for causes of breast sagging and for answers on how much was acceptable, desperate to find out if I was normal. From my investigation, I discovered that, as much as our society loves big breasts, it hates the inevitable sagging and stretch marks that accompany them. I found pictures and medical diagrams detailing where a woman’s breasts should fall depending on her age and parity. Mine did not match. Some studies said that not wearing a bra was the best way to prevent sagging and others claimed the exact opposite. I also found an abundance of blog articles and Tumblr posts written by other large-chested women lamenting the shape of their breasts.

Suddenly, I wasn’t so sure if I was beautiful in society’s eyes, or even my own. I found myself wondering if I would have been better off had I been shaped like my A-cup best friends. From then on, I felt more and more ambivalent about my chest. As aesthetic trends swung from one extreme to the other, so did my confidence. I found comfort at the sight of busty celebrities, but fell into insecurity and self-doubt when I saw that my body didn’t match the small-breasted, lithe runway models that became all the rage a few years ago.

By the time I was ready to enter my senior year of high school, my breasts had grown to an intolerable size. I had already had to quit tennis and lacrosse, my clothes never fit properly, I could only find my bra size on Amazon, and everyday activities like walking, dancing, and sitting for long periods of time were torture for my lower back. I had tried a thousand different bras, sitting postures, weight loss strategies, and exercise techniques in order to combat the pain, but nothing worked.

That summer, I began to seriously consider getting a breast reduction. In typical Gen Z fashion, I Web MD’d the hell out of the surgery before ever talking to my mother or doctor about getting it done. I combed through the subreddit devoted entirely to breast reductions, scrolled through hundreds of before and after pictures, and read every article I could find on the subject. I even went so far as to watch videos of the procedure (both the “anchor” and “vertical” techniques).

After considering the risks, I was almost sure that I wanted to get the surgery, but still had one reservation: I was worried about being flat-chested afterwards. So much of my identity was tied up in being “the girl with the boobs.” Although I definitely wanted to enjoy a pain-free life and be able to exercise with ease, I was afraid to lose what so many others had told me was a beautiful, valuable asset. When I complained about my size, people would often remind me that women paid thousands of dollars to look like me, and I should be grateful. If I was no longer big-breasted, would I still feel comfortable in my own skin? On the other hand, was a desire for a smaller, perkier chest subconsciously swaying my decision? I wanted to get a breast reduction “for myself,” but what does that even mean in a society in which women claim to conform to certain standards of beauty and compulsory femininity (and even get the exact opposite procedure) “for themselves”?

After weeks of thinking about the surgery, I had reached a dilemma. If I remained large-breasted, I might meet one beauty standard, but my stretch marks and sagging would make me unable to meet another. If I were smaller-breasted, the inverse would be true. But as time went on and my back pain got worse, I decided that I had to prioritize my health over any real or perceived benefits to having a large chest or any aesthetic concerns I had about being smaller-breasted. I had to finally accept that it is impossible to completely conform to society’s beauty standards. Holding onto my breasts because of how they looked would only hurt me physically (and psychologically) in the long run.

In the year in between my decision and the surgery itself, I tried to love my body as it was, because I wanted to be sure that I wasn’t getting the surgery solely for cosmetic reasons.

Two months post-op, I still am not used to seeing myself without large breasts and often don’t recognize myself when I pass by mirrors and windows. But I don’t regret it one bit. I’m happy that I don’t wake up with neck pain and that I’ll be able to live my life without back pain. But, most of all, I’m happiest to find that I still feel like myself. I was never just “the girl with the boobs.”

Emma Jones is a college freshman from the American Midwest.

What's Current: Cyntoia Brown to be released from life sentence this week