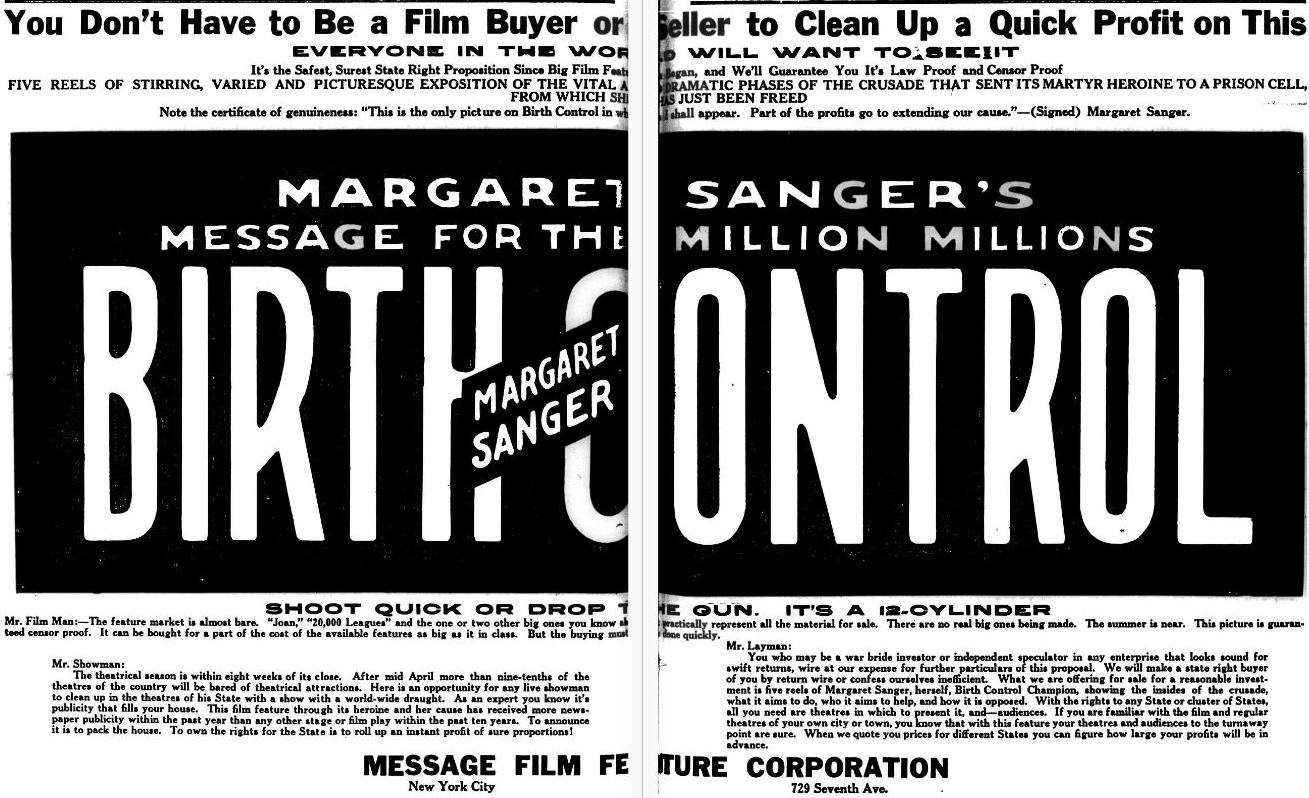 A few years ago, I was hired to help write a book about the history of film exhibition. It wasn’t a subject I knew a lot about, but the abundance of research materials at my disposal allowed me to get up to speed quickly: My New York-based co-author, Charles B. Moss, Jr., runs a family-owned movie-theater business that’s been operating for 12 decades, and I had full access to his Times-Square corporate archive.

These materials included dozens of massive scrapbooks from the early part of the 20th century, containing newspaper ads for the company’s New York City theatres. As I flipped through these yellowed tomes, I noticed that certain themes came up again and again in the early age of film. This was a time when a steady stream of young adults were abandoning the farm for big cities, causing a wave of concern about the moral corruption that would afflict these naïve newcomers. Film protagonists often were young women whose lives were wrecked after they had abandoned the familiar rituals of home life.

In 1917, for instance, the theatre circuit run by B.S. Moss (my co-author’s grandfather) advertised a seven-week cycle of five-act “photoplays” — theatrical performances filmed for cinematic distribution — called Seven Deadly Sins, with each instalment dedicated to a different vice. The plot centered around Eve Leslie (played by silent-era film star Shirley Mason), who is “young, beautiful, appealing. Wealth, luxury [and] social success are within her reach. But they have a price. The men and women who have the power to give Eve her heart’s desires are pawns of Seven Deadly Sins. They will give her what she wants, but her soul will be stained in the getting.”

In these early days of film, theater owners had difficulty getting a steady supply of high-quality content, partly because many American stage actors were reluctant to appear in a medium that was still considered lowbrow. And so in the late 1910s, Moss took a stab at producing his own films.

During my research on Moss, I was astonished to learn that one of those films, a 50-minute 1916 melodrama called The Salamander, still survives to this day in watchable print form at the Library of Congress in Washington, D.C. Then I got a second surprise: This Jewish immigrant from what is now the Polish town of Wisnicz turns out to have been something of an early feminist.

Offering a bold twist on the trite, moralizing tales of good-girl-gone-bad, The Salamander fronted country-girl heroine Dore Baxter (played by Ruth Findlay), who sets out from home to courageously track down the evil con man who cast her family into poverty. The work on which the film was based, Owen Johnson’s 1914 book of the same name, was the first novel of any note to set a flapper as its protagonist. On cover of the first edition, Baxter is described as “a girl of the present day in revolt—adventurous, eager, and unafraid” who “comes roving from somewhere out of the immense reaches of the nation, revolting against the commonplace of an inherited narrowness.”

The American film industry always has reflected the wider political and social attitudes of society-at-large. Sadly, this includes the openly expressed bigotries of the early and mid-twentieth century. But the available evidence suggests B.S Moss did tend toward views that were liberal by the standards of his time, at least in regard to (as we would now call it) first-wave feminism.

One of Moss’s most famous collaborators, I learned, was none other than Margaret Sanger (1879–1966), the nurse and activist who opened America’s first birth-control clinic, and first popularized the term “birth control.” When a sympathetic documentary was released about Sanger in April 1917 — simply titled Birth Control — Moss’s company was listed as producer.

In the promotional materials leading up to the release, Birth Control was described as “five reels of stirring, varied, and picturesque exposition of the vital and dramatic phases of the crusade that sent its martyr [Sanger] to a prison cell [for running an illegal birth control clinic in Brooklyn], from which she has just been freed.” There is also an accompanying “certificate of genuineness” from Sanger, presumably meant to assure exhibitors that no other competing film of this type would be produced. It read: “This is the only picture on Birth Control in which I shall appear. Part of the profits go to extending our cause.”

Unfortunately, the public never saw the movie, which was banned by the city’s license commissioner before its first public screening at New York’s Park Theatre, on the grounds that the subject matter was “immoral, indecent, and contrary to public welfare.” Instead, the film was screened privately, before several hundred reporters and activists, and never shown again.

There are, to my knowledge, no surviving copies. What we have left of the contents are accounts such as those provided by New York State Supreme Court judge Nathan Bijur, who described the plot of the movie in a court decision that (temporarily, alas) set aside the license commissioner’s edict:

“The scenario of the play may be briefly summarized as follows: It presents a number of pictures showing the poverty and misery frequently associated with the presence of large families of children among the poor. It illustrates the sufferings of one or more women to whom childbirth means serious danger to life. It then presents pictures of comfort among the rich where smaller families are supposed to obtain. Intermingled with these are pictures of Mrs. Sanger acting as a nurse. She is strongly tempted to advise some of the suffering poor women on the subject of birth control, but refrains from giving such information because it is forbidden by law…Finally, she concludes to defy the law and opens a clinic to disseminate information on this subject. There is then portrayed a movement undertaken by persons of means who engage detectives to suppress her efforts. The clinic established by Mrs. Sanger is exhibited crowded by poor women… It may perhaps be inferred from the pictures that the rich violate the law by employing contraceptive methods of which the poor are ignorant.”

The legal fight over Birth Control in New York’s courts became part of the generation-long battle over censorship of the film industry; a fight that didn’t fully end until the 1960s. But that fight would be left to others, as Moss would leave the film-production business shortly after the end of World War I, and focus on the art of exhibition.

At around the same time, Sanger founded a group called the American Birth Control League, whose goal was to ensure “that every woman must possess the power and freedom to prevent conception except when…born of the mother’s conscious desire; and only begotten under conditions which render possible the heritage of health.” I’m guessing most readers will know the group better by the name it adopted two decades later: the Planned Parenthood Federation of America.

Adapted, with permission, from Magic in the Dark: One Family’s Adventures in the Movie Business, by Charles B. Moss and Jonathan Kay. Published by Sutherland House.