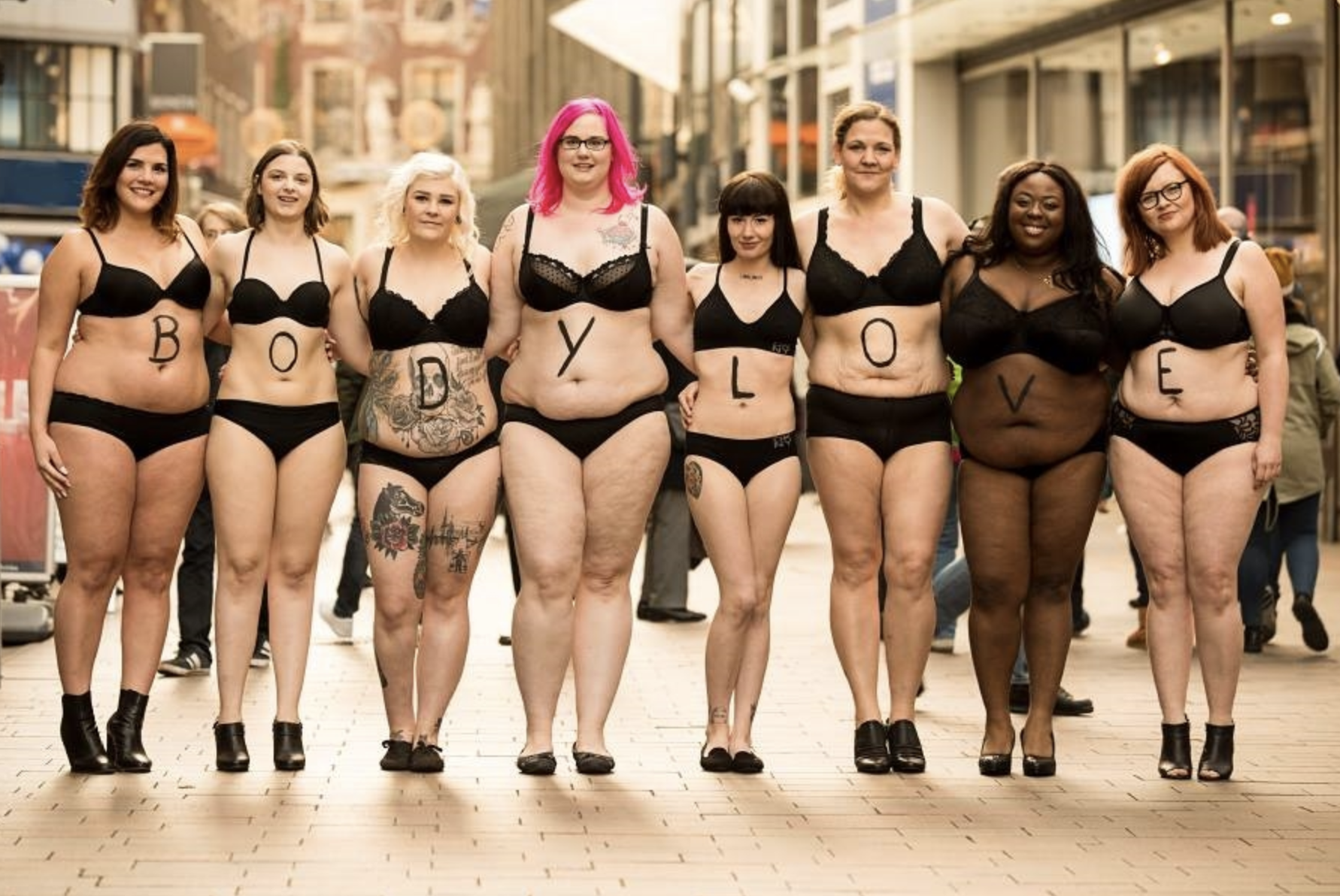 A recent report in the Wall Street Journal shows Old Navy’s sales plummeted after launching their BODEQUALITY campaign. This new approach to retail offered sizes 0-30 and XS-4X in all women’s styles, eliminated the designated plus size section, and placed mannequins in sizes four, 12, and 18 in stores.

When Old Navy launched BODEQUALITY in August 2021, its website declared a “fashion revolution” for women. A Bizwomen headline praised the retailer for upping “its body positivity game.”

And the men? In an interview with Retail Leader, Old Navy vice president Alison Partridge Stickney said, “Our BODEQUALITY launch is for our women’s assortment.”

You don’t need to spend an excessive amount of time online to notice the way messaging around men’s and women’s health differs. Influential men share tips on diet and exercise. Influential women denounce detox products and celebrate Plus Size Appreciation Day, an observance founded by a women’s organization. Men encourage their followers to work out like a Navy SEAL. Women encourage their followers to just have fun with their workouts. These messages from the media, celebrities, and companies demonstrate vast disparities between approaches to men’s health and wellness versus the woman-focused body positivity movement.

For men, there is a focus on using nutrition, fitness, and mindset to inspire them to become their best selves. Body positivity, on the other hand, pretends to empower women while actually discouraging them from becoming their best selves, instead asking them to adopt an alternate reality. This is a reality where weight doesn’t matter, encouraging “health” is shaming, and the gym (and fitness in general) is a discriminatory place.

Though there is an ugly history of the advertisement, media, and entertainment industries making women feel insecure, “body positivity” is an overcorrection. The movement insults women by treating them like they’re too fragile to receive health advice or set high expectations for themselves. Even worse, body positivity puts women’s health at risk.

When the body positivity movement emerged in 2012, I welcomed its messages. I have body dysmorphic disorder (BDD), a condition that causes its sufferers to obsess over their appearance. (I obsess over my teeth, complexion, weight, and under eye area.) The pressure on women to meet particular beauty standards can be a factor in developing BDD, and I can certainly attest to internalizing such standards from magazines like Seventeen, viewing food as a means to an end — a way to look like the young women on the magazine’s cover. Later when I began binge eating in college, accusations that Seventeen and magazines like it are fatphobic — a buzzword within the body positivity movement — made me feel validated.

Body positivity originated in feminist movements aiming to combat negative treatment of fat people (particularly women, who face inordinate pressure to stay thin, and are treated as repulsive, bad, or simply invisible if they get fat) in the late 1960s and early 1970s. One organization, the Fat Underground, called medical weight-loss treatment a form of oppression. These women treated the oppression of fat people by employers, the fashion industry, the medical establishment, and others as a civil rights issue. The Radical Therapy movement inspired what they called “fat acceptance” — its practitioners mobilizing to change social norms, including the idea that there is something wrong with fat people.

Until recently, anti-fatphobia activism consisted of picketing in front of the White House, protesting at gyms, appearing on talk shows, and participating in Pride parades. Thanks to the advent of social media, hashtags helped “body positivity” and all its variations go viral. Today, the movement is no longer limited to dismantling fatphobia, but also aims to celebrate and normalize features and bodies that the fashion and beauty industries once excluded. “Inclusive” marketing campaigns show women with body hair, people identifying as transgender, and those with disabilities, all united under the banner of body positivity.

The movement is overwhelmingly female, and fair enough: women could use the help. There is a self-esteem gap between the sexes, a difference some studies attribute to Western cultures’ emphasis on the appearance of women and girls. Body positivity activists don’t just give pep talks. They ask companies to get rid of unrealistic beauty standards and use women who look like them in marketing campaigns. The movement recognizes the real harm done by advertising that targets women, making them feel inadequate and hyperfocused on flaws which are often invented by the industry itself, so works to counter messages selling wrinkle-free skin, a slimmer body, or straighter hair.

The typical men’s wellness influencer is the kind of person who appears on America’s most popular podcast, The Joe Rogan Experience. Ultramarathon runner David Goggins, Medal of Honor recipient Dakota Meyer, and entrepreneur Evan Hafer offer listeners the best of both worlds because they preach grit and vulnerability. These are the men who wake up at 4:30 AM or run 40 kilometers a day but will also cry on air or talk about their depression.

While there are female equivalents to these men’s wellness influencers, they often face harsh criticism from those who denounce their products, claim that the body image promised by their products or programs is unattainable, or that their advice is fatphobic or shaming in some way. (Body positivity has stayed true to its roots, the fiercest opponents rallying around the issue of women’s weight.) This is where I part ways with body positivity. For every yogi or fitness equipment entrepreneur, there is someone who opposes the suggestion of changing or making progress. When Adele lost 100 lbs, she faced backlash from fans who viewed it as a “betrayal.” Actress Rebel Wilson’s weight loss was treated similarly, labelled as “toxic.”

This is the fragile mindset that takes body positivity from being a movement about happiness and acceptance to a movement that tells its followers to just do nothing. Unlike men’s efforts at self-improvement, women’s concept of wellness isn’t particularly physical. Most wellness lists I read are for products that help women sleep (melatonin gummies), relax (meditation apps), feel good (vibrators), or look good, superficially (sheet masks).

The body positivity movement doesn’t actually help women feel better but asks them to close their eyes and plug their ears. It says the world around them is the problem, and that they are helpless to do anything about their own circumstances, life, or self-worth. This is the opposite of empowering.

Criticisms of body positivity have a lot in common with criticisms of wokeism. Just as trigger warnings and safe spaces don’t improve students’ mental health, bending over backwards to accommodate body positivity advocates doesn’t actually make women healthier. To avoid accusations of phobia, retailers like Old Navy offer sizes that don’t reflect the needs of their customers. (After BODEQUALITY’s launch, Old Navy customers reported frustration over not finding their size.)

Body positivity advocates also ask that educators accommodate students. Edutopia, an educational foundation, suggests displaying posters that discourage children from giving health advice and choosing books that don’t overrepresent “skinny” characters. Edutopia provides examples of body positive books, all of which have female authors, female main characters, and a common plot, wherein young women experience a parent, doctor, or some other adult encouraging them to lose weight. The books don’t end with physical transformation, but a transformation of their world. The young women learn to love themselves, and the people in their lives learn to accept them as they are. The messages of these books suggest to children that women should refuse to change and self-improvement is the domain of men.

The long arm of body positivity even reaches into health care. Consider “health at every size” (HAES), a health care model that researcher and body positivity advocate Lindo Bacon says originated in the fat acceptance movement. HAES claims that “intuitive eating and joyful movement” can replace dieting and exercise, and weighing a lot doesn’t cause diabetes or heart disease. Though body positivity activists rely on the argument that correlation does not equal causation, experts from the Centers for Disease Control (CDC) to the American Heart Association provide indisputable evidence of obesity’s impact on disease.

Body positivity advocates shut down conversations that linked obesity with COVID-19 deaths. Obesity can affect both sexes, but is more prevalent in women than men, and that gap widens every year. If we are to address this disparity between men’s and women’s health, we can’t punish women for losing weight or ask doctors not to weigh patients and not point out when a woman’s weight has become a health issue. Limiting our workouts to doing what “feels good” deprives women of the sense of achievement that comes with testing your physical limits or following a diet that requires discipline, which men are encouraged to do.

Women need to ask which parts of body positivity are worth keeping, in terms of reducing self-hatred and unhealthy obsessing over physical flaws, and which to leave behind. Inclusivity is not such a bad thing if it means advertisements and product lines made for women of colour, women with disabilities, and other marginalized groups. Normalizing wrinkles and natural hair is also a positive thing. But obesity, eating whatever you want — even if that means overindulging in junk food — and refusing to encourage women to exercise does not help women.

Women could learn something from men’s wellness messaging. Setting goals and having high expectations for yourself can be a way to love who you are. I hope that, like men, we realize that vulnerability can and should coexist with determination, grit, and a desire for self-improvement.

The body positivity movement needs new icons: athletes; intelligent, successful women like Michelle Obama; those who have suffered adversity but rose above; and women with disabilities who are refusing to be invisible, for example.

Old Navy was taught a lesson by women who spoke with their wallets. The message was implicit, but I’m here to make it clear: stop talking down to us. We shouldn’t need to be lied to to feel good about ourselves.

Shelby Kearns is a freelance writer who lives in Oklahoma. She tweets @shelbytkearns.