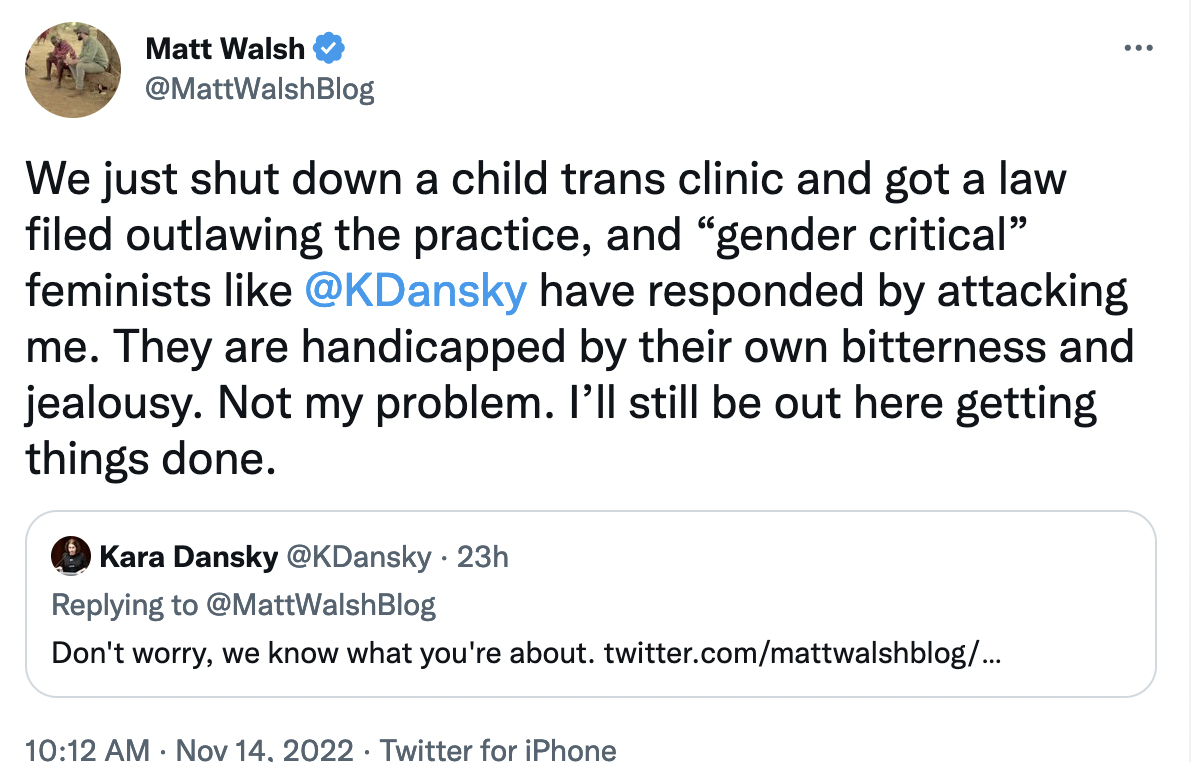 A war is raging online about what gender is, who owns the fight against trans ideology and to save women’s sex-based rights, and men. It always feels rather to silly to write whole articles about Twitter spats, but this particular debate’s significance exists beyond the social media sphere and I’m frustrated at the way it’s being represented in a space I have been banned from participating in, so I will address it here.

I apologize in advance for the insider baseball nature of this post. Many of you will know who and what I am addressing, and if you don’t, I hope this post will be useful to you in other ways.

A most satisfying pastime of some men arriving to the fight against gender identity ideology appears to be asking, ad nauseam, “Where are all the feminists?” While I understand the frustration and bafflement at watching male fetishists take women’s rights and the actual definition of the word “woman” from right out under women’s noses — with the support of many women, at that — the question of “Where are all the feminists?” feels like a slap in the face to those of us who have fought to be heard in this fight for years — decades in some cases. It also reveals chosen ignorance. The men who say such things are either being intentionally dishonest or are so new to this fight they haven’t bothered to find out what has been going on before diving in, ego first.

While these men may not be familiar with Janice Raymond, Julie Bindel, Sheila Jeffreys, or Lierre Keith, it would be difficult to miss women like myself, Kellie-Jay Keen, JK Rowling, Maya Forstater, Kara Dansky and others whose fights have been covered and amplified in mainstream media for some time now. This is despite relentless efforts to silence and bully any woman who speaks out against gender identity in the most vicious of ways. These men know I was banned from Twitter for saying that men are not women and for referring to a male predator as “he.” It was covered numerous times on the biggest podcast in the world, as well as in the right wing media they all either work for or read (as well as in the mainstream media). If they don’t know the other women I mentioned, they have buried their heads in the sand (and, frankly, I don’t believe they don’t know these other women).

“Where are all the feminists?” is a rude question to ask, considering that it is because we spoke out first, before it became more common and acceptable to do so, that we were banned from social media, visited by the police, fired from our jobs, and threatened with rape and murder. Women spoke out not only when it was dangerous for them personally, but when they knew it would lead to their silencing, and when they knew few would support them. For men who waited until more recently to speak out, when they failed to support the women who spoke out years ago and suffered for it, and who continue to refuse to support those same women now, demonstrates cowardice and a lack of integrity.

I support anyone who speaks out on this issue, but I do not support dishonesty. I do not support men with huge platforms, financial backing, and little to lose, who are now stealing women’s words and arguments without crediting those women and refusing to support those women even now. Men who refuse to share their platforms and power, because they prefer to maintain a narrative that says, “Only I am brave and brilliant enough to say such things,” and that women are too pathetic, stupid, and afraid to fight this fight — that only men can and will do it. I do not support men ganging up on women because they have boundaries or fair criticisms. I do not support men who are fixated on destroying women who have challenged them or who are lording dirt, threatening to expose women should they speak out against them. That, specifically, is dangerous, abusive, behaviour — the kind used against cult members to keep them from leaving a cult or speaking out against leaders of the cult. Get it?

To me, this is not about excluding men from the fight, and certainly it is not about excluding conservatives or right wing people from this fight. I have always said I want everyone in this and all the support we can get. I am not anti-man or anti-right wing people. This is obvious to anyone who knows me or has followed my work in recent years. In fact, a primary criticism launched at me by radical feminists is that I like men too much, and am far too friendly with the right. So I will not accept the lie that women who are complaining about men attempting to overtake this movement (while those same men claim women have either done nothing to fight this, or simply have bungled things) are doing so because they are “man-haters” and misandrists.

There are numerous men I work with, speak to, and support in this movement, and anyone with a brain and eyes can see this.

The men who I have a problem with in this movement are men who have behaved in egregious ways; behaved abusively towards women; and/or lied, manipulated, or threatened. It is not about sex or politics. It is about what I have experienced and observed with regard to individuals and their behaviour. The fact that these men who have behaved in egregious and/or dishonest/manipulative/abusive/sexist ways are complaining endlessly online, and making the fight for women’s sex-based rights about their egos and hurt feelings is abhorrent and should demonstrate to anyone watching that women were exactly right about them.

If you think your ego should take precedence in a conversation about and fight for women’s rights — against the erasure of women — you really should get the out of the way, and you really should, as the cliche goes, sit down and shut up.

I am tired of watching these men whine, denigrate, verbally abuse, insult, condescend to, and lie about women because someone dared criticize their behaviour, point out their sexism, or call out their lies. And I am disappointed in the women who have leapt to their defense.

If the work is so important to you, mighty male saviour, then get back to the work and stop spending endless hours and days on Twitter attacking women in gross, childish, and sexist ways; fixating on individual women in creepy and threatening ways, refusing to respect their boundaries, and then enlisting other women in your defense, thus creating a divide in a women’s movement in order to protect yourself. It is toxic, self-absorbed, and in fact proves the points women are making about you: that you are narcissistic, egomaniacal, and are in this fight not because you care about women and girls, but for your own interests or glory.

Grow up, learn to control your anger, or log off.

I will also say that if I choose to avoid, not work with, or speak out against a man, there is a reason for that — it is not simply because he is a man. I have been in this fight and have been doing this work long enough to have a well-developed spidey sense (this applies to women, too, in fact), and while my gut may not always be entirely correct, it is usually correct, and I would rather be safe than sorry. And men who center themselves in women’s movements should set off alarm bells, at very least, never mind men who behave in misogynist, threatening, or abusive ways towards women. I do not make public statements about people for no reason, and while no one is obligated to believe me, I hope that my integrity, writing, work, and public behaviour has demonstrated a level of trust wherein my statements be taken seriously, rather than as a contribution to petty drama.

Now, on the question of whether all this trans nonsense is the fault of feminists, for mucking about with “gender” and the notion of “gender fluidity”: this is partially true.

Feminists did insist that women are not necessarily or inherently all made up of feminine stereotypes. Nor are men walking stereotypes of masculinity. What I have said for many years now is that people have personalities, likes, and dislikes. There are trends related both to evolution and socialization that lead men, in general, to be more aggressive or domineering, and women, in general, to be more nurturing and cooperative, but this is not true of all men and women. Individuals are more complex than that. And those individuals who do not fall squarely on one or the other side of the feminine/masculine binary do not cease to be female or male as a result. One’s sex is immutable, one’s “gender” is simply about preferences, personality, and behaviour. I am a woman, despite the fact that I am not nurturing at all, and that usually my boyfriends have to clean up after me while I laugh hysterically at my own (very impressive) belches.

This notion of gender being a rather useless concept, for the record, is a feminist concept, not a concept invented by Matt Walsh.

At the same time, modern gender studies scholars like Judith Butler, who should in no way be taken seriously by any legitimate feminist, have confused the concepts of sex and gender theory to the point that “What is a woman?” was treated as a confusing question, despite the fact that it is not confusing at all.

MANY feminists and women dropped the ball big time on gender identity ideology. It is baffling and maddening. That women consistently put their own safety, interests, and gut feelings aside to accommodate male interests, feeling and desires is disappointing and enraging. Whether it is with regard to fetishists and trans activists or with regard to creepy men claiming to be saving women from themselves, then spending far too much time online trashing women. That said, it has also been women and feminists who have been speaking out against transgenderism and gender identity ideology from day one — again, for decades — alone and unsupported, endangering themselves in the process. And for a man to show up in this fight after the fact and claim he is the only one doing things properly, then band together to bully individual women, and to claim that all women have done is to “sit on the sidelines and whine“, when he could have shown up to support women in this fight years ago, is, well, typical of men. Sorry! But sometimes stereotypes play out.

If you want to help, then help. Don’t make things worse, don’t shit on women who are already having a hard enough time fighting this on their own, don’t lie about women, don’t steal our words and analysis, pass it off as your own, then claim we have done nothing. And stop, for fuck’s sake, asking where all the feminists are.