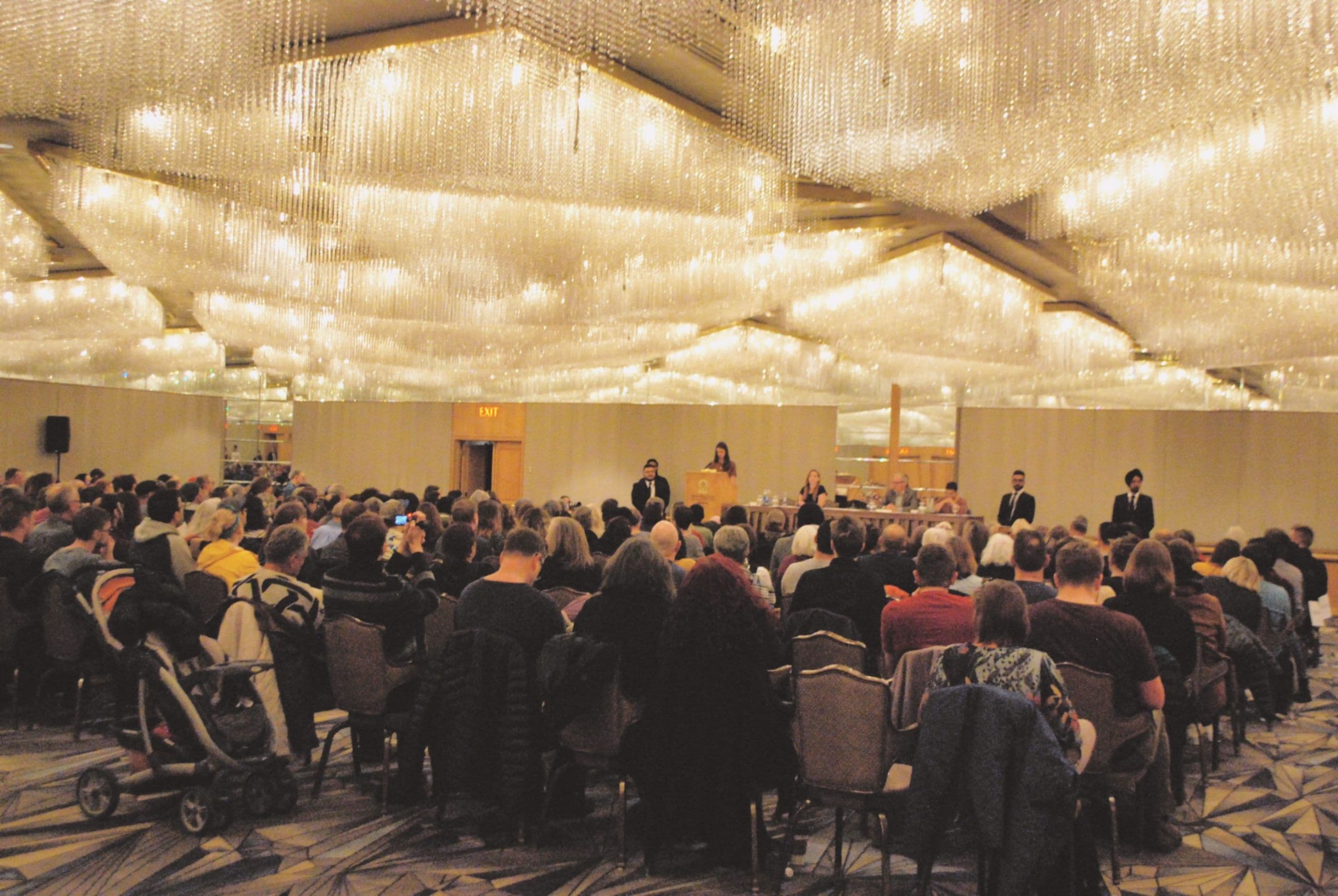 On Saturday, for the second time in a week, journalist Meghan Murphy, (editor of Feminist Current), was escorted by body guards and local police to give a talk on women’s issues. The first took place on Tuesday at the Toronto Public Library, after city librarian Vickery Bowles withstood intense pressure from trans activists, CBC journalist Carol Off, and even Toronto Mayor John Tory to cancel a room booking made by Radical Feminists Unite for the event. “I’m not going to reconsider supporting free speech,” Bowles told Off.

On October 29, Murphy and her audience were met with several hundred vociferous protestors chanting “Trans rights are human rights!” who hounded attendees as they left through the back door of the library, yelling, “TERF bitch!” and “Walk of shame!”

Saturday’s event featured a panel of journalists, including Murphy, Anna Slatz (The Post Millennial), and Jonathan Kay (Quillette). The event was originally scheduled to take place at Simon Fraser University, but Professor Mark Collard withdrew his support at the last minute, citing concerns about violence. Organizers were able to book a room at the Pan Pacific Hotel, where over 300 attendees were met with fewer protesters than in Toronto, but delivering a threatening message nonetheless. One activist carried a guillotine made of pizza boxes with the message, “TERFS, SWERFS, Step Right Up” written on it. 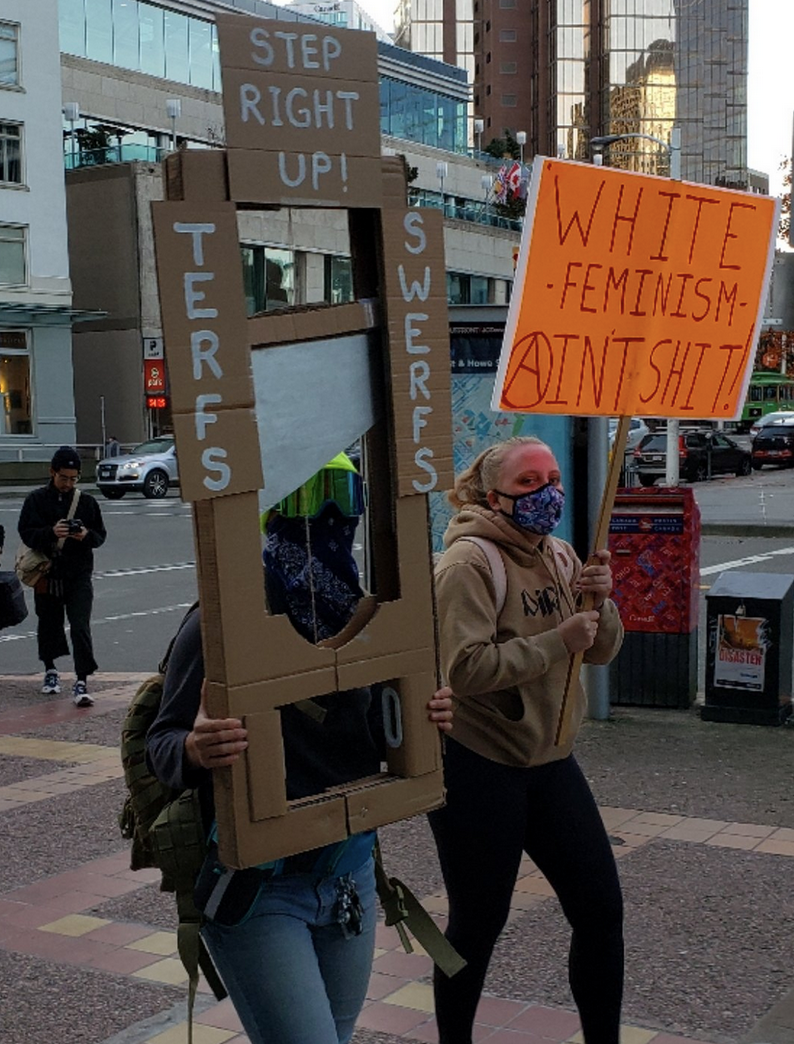 What is Murphy saying to provoke such outrage and threats of violence?

Her talk included much of what she has been saying for the past several years to anyone who will listen, including during her testimony against Bill C-16 (which enshrined gender identity into the Canadian Human Rights Act and the Criminal Code in 2017), and in the Scottish Parliament, where she was invited to speak earlier this year. Murphy said she is “not concerned if one identifies as trans,” nor is she “opposed to people stepping out of [socially prescribed] gender roles.” However, Murphy continued, one “can’t change sex through self-declaration or any other means.”

Further, this has serious implications in law and public policy. “Males pose a danger to women,” Murphy said. “Not all males, but only males.” Now that Bill C-16 is law, the Ontario Provincial Police and Statistics Canada do not report the sex of criminals, but instead their gender identity. “This means we are no longer able to track male violence against women” said Murphy. Men who identify as women are now allowed to share spaces in shelters with female victims of domestic violence and are transferred to women’s prisons resulting in sexual assault and harassment of female inmates.

This is not just about letting [trans] people live their lives, Murphy summed up, but “about legislative changes that impact half the population in incredibly dangerous ways and strip us of the rights that our foremothers fought for for decades.”

Anna Slatz, who covered the Jessica Yaniv scrotum-waxing story, echoed many of Murphy’s themes. It should not be controversial to say that “men are not women” and that “women deserve spaces separate from men,” she began. “Women have fought long and hard for their rights to bodily autonomy, safe spaces and sexual determination,” Slatz said. Yet she has been accused of “committing genocide” and “subscribing to eugenics” for asserting these claims.

“If ever there was a testament to the unacknowledged power these so-called victims have,” Slatz concluded, “it is that they have the ability to alter language and weaponize the state and media against women’s realities and rights.”

Jonathan Kay, the only male member of the panel, spoke as long as the two women combined. Slatz voluntarily kept her remarks short; while Kay spoke about 25 per cent longer than Murphy and some complained that he monopolized the question and answer period, with women in the audience calling out, “Can a woman ask a question?” to get him to yield the floor.

Kay sympathized with the women’s concerns about gender identity law and policy and acknowledged that men are not affected in the same way. For example, “male athletics are not being rendered a mockery by trans men,” he said.

Kay distinguished between the general trans population and trans rights activists, arguing that “victims also include trans people” who “are not like the extreme activists you see on social media” and who are ill-served by those activists. “There are rights on both sides,” he said.

If you see someone angry, yelling “TERF!” or someone like the protester who had a guillotine, Kay said, “they might have a very complicated and painful personal history.” He added, “I think you have to be scrupulous in terms of being respectful and humane when you have interactions with trans people.”

Arguably the most dramatic moment occurred when British Columbia New Democratic Party (BC NDP) Vice President and trans activist Morgane Oger rose to ask a question. A member of the audience began humming “The Imperial March,” causing Murphy to burst out laughing and cover her face with her hands.

Oger is well-known in Vancouver trans politics and for making controversial statements on social media. For example, Oger had a hand in the discontinuation of city funding for Vancouver Rape Relief (VRR) because of the collective’s women-only policy. When vandals wrote “Kill TERFs” and nailed a dead rat to the door of VRR, Oger tweeted, Mafioso-like: “I empathize VRR feel threatened by the predictable response to their conduct… I am ready to help VRR get out of their mess if they wish to.”

During the BC Human Rights Tribunal hearings of the Yaniv cases against aestheticians who offered women-only services and refused to wax the trans woman’s scrotum, Oger tweeted: “We are all forced to do some things we don’t like in our work, grow up.”

Oger has a special animus for Murphy, regularly accusing her of illegally publishing hate speech, of promoting discrimination and inciting violence. When Murphy was invited to speak to the Scottish parliament, he accused her of exporting hate. More recently, Murphy accused Oger of following her around her Vancouver neighbourhood, and filed a police report.

Oger spoke slowly: “I hear a lot of highly polarized views… We can’t get the conversation started… until we get past ‘You don’t exist, you’re diseased, you’re broken, you’re demons.’ When are we going to start to talk about policy that protects people?”

“I’m not saying that trans people are diseased or broken. This is more libel that I’m not going to tolerate. No one is saying that… We’re talking about women’s rights and women’s spaces.”

“I have no problem with protections for any number of categories… The problem is when one protected category is weaponized against another and brings down their ability to protect themselves. Like we saw with the Jessica Yaniv case.”

Kay spoke up, acknowledging that he expected to “lose the room.”

“I would like to salute you, Morgane,” Kay began. “Thank-you for coming and asking your question.”

An activist’s job is to “state her cause in a maximalist way,” Kay said. It is the job of editors and lawmakers to balance claims made by different activist groups. Oger, Kay emphasized, “is just doing her job.”

“His job!” members of the audience called out.

“It doesn’t do you any good to be gratuitously impolite. If you want to create dialogue, if you want people to take you seriously, be polite. Be respectful. She came into a hostile room, stood up and asked a question… Being respectful changes more minds.”

Here then, encapsulated, is the women’s versus trans rights conflict. Women recognize that their history of oppression is sex-based, not gender-based, and that as law and policy changes to prioritize gender identity over sex, they lose recently-achieved hard-won rights and protections. They attempt to arrange a meeting to talk about these issues and are met with tremendous hostility and libel. Venues that agree to rent space later renege due to trans activists’ objections. Organizers and speakers receive threats of violence and are libeled. New arrangements are made in secret; women are notified just hours before the event. This is the pattern in multiple countries.

When they arrive they are met with belligerent protesters who scream in their faces. Sometimes their talks are disrupted, as was the case in Brighton, England in September, when protesters banged on the windows throughout a Woman’s Place UK meeting while police stood idly by.

Everywhere, a rebellion is brewing. Women are losing their fear and organizing to fight back.

Katherine M. Acosta is a writer and sociologist. She makes her home in Madison, Wisconsin.