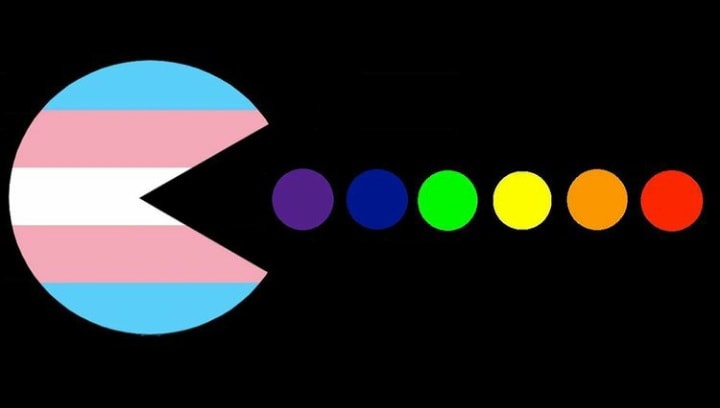 June is here again — the month when some of us fondly recall celebrations past, and do our best to survive the present moment’s carnival of doom. Once again we find ourselves living under the flag of Pride. Its symbol — the hijacked, mangled rainbow — flies high over the empire of gender authoritarianism, where trans activism, the pharmaceutical industry, politics, media, and assorted foundations, are intent on obliterating women’s rights, and turning children into medically-dependant, physical, and psychological wrecks for the rest of their lives. For this reason, it is time, once again, to spruce up the city crosswalks, hoist a scrap of rainbow over City Hall, and “get with” the spirit of the parade.

“Transgender youth” workshops will be held where people mistake the surrender of children to dangerous illusions with kindness and inclusivity. Those few storefronts not already exhibiting the rainbow sticker will get stuck with one now. And, day after day, over an ever-expanding month (even June seems to have been coerced into rethinking its limits), the citizenry will be urged, prodded, and bulldozed into acknowledging the achievements and struggles of Lesbian, Gay, Bi-Sexual, Transgender, Queer, Non-Binary, Pansexual, Intersex, and Two-Spirit People, as if they were a band of explorers that had staggered back into civilization after discovering the Northwest Passage… Again. All except the Ls, Gs, and Bs, who either dropped into an icy crevice, or were cannibalized somewhere along the way.

Many of the public who line the route (virtual or actual) of these Pride celebrations would be mystified — even horrified — to know that, for droves of feminists, same-sex attracted men and women, and discerning people of all variety, June is a month where we mourn what the LGBTQ+ movement has wrought. For this reason, it seems more important than ever to review past victories and acknowledge the decades of committed work; the hard-won, slogging gains which once warranted authentic, blissed-out street parties — the sort of uninhibited celebrations at which no corporate entity, foundation representative, or wily politician would have been caught dead.

The term “pride” was still true to itself at that time, it’s underlying meaning having something to do with dignity, self-respect, and honour; it had yet to begin its deterioration into entitlement, self-pity, and narcissism. Often, these earlier civil rights accomplishments were achieved in the midst of general disinterest, or even active, hostile resistance. Just as often, courageous individuals were forced to step forward, at considerable risk to themselves, and brave the storm on everyone else’s behalf. The challenges and successes were real, numerous, and life-changing for all: protection against discrimination in housing, employment, and immigration; the right to adopt children; the right to receive benefits in common law relationships; the right to serve your country; the eventual and important addition of sexual orientation into the Canadian Human Rights Act. The option to marry, if you so chose.

Compare this to the accomplishments of the “pride” we are meant to celebrate in 2021: the loss of single-sex segregation in women’s washrooms; the housing of male offenders with incarcerated women; the ability of men to compete in women’s sports; the erasure and harassment of women, and lesbians, as a result of “gender self-identification;” the dangers of puberty blockers and hormones for children; the tragedy of surgical procedures which are doomed to fail because they will never accomplish the desired wish; the return to harmful sex-role stereotypes; the dangers to women’s shelters as a result of accepting men into their midst. (Vancouver Rape Relief and Women’s Shelter is the only transition house in Canada maintaining a women only policy, and lost a city grant as a result.) These are just some of the accomplishments for which we are urged to feel “pride” — all month long.

I’ll admit I sound dark, even to myself. And I have wracked my brain to come up with something about these celebrations that we might cling to, and feel good about. Instead, what I see is that the LGB Alliance, the British-based advocacy group whose mission is to assert “the right of lesbians, bisexuals, and gay men to define themselves as same-sex attracted,” is being campaigned against by trans-focused charities who hope to reverse the Charity Commission’s recent decision to grant the group charitable status. Lesbian And Gay News observes that “2021 Pride month will set the stage for an extraordinary legal spectacle of large, multi-million pound trans-focused charities seeking to silence and effectively destroy a lesbian/gay/bisexual focused one.”

Closer to home — if those who wish to gag women had succeeded, none of us would have access to this website, which was hacked and replaced with mindless drivel on June 1. One can’t help wondering what exactly drives these so-called “trolls,” aside from their blatant hatred of (and futile obsession with) women. Imagine waking up one day to suddenly find ourselves unable to communicate, write, and read about the issues that affect us so deeply. The movement that I knew never sunk to the level of trashing the rights of others because we ourselves were so lacking in ethics and self-worth that organized expressions of authentic and heartfelt concern threatened our identity.

Regardless, a sensible case could be made that, after achieving rights and protections equal to those of our fellow citizens, the rainbow flag should have become nothing more, or less, than the symbol of a certain moment in time in which progress and human decency carried the day. Then, it might have been gracefully retired, surrendered back to the sky, so to speak, where we could gaze up, after a hard rain, and resist equating the spectacle with politics. Instead, like an indentured servant who has been bamboozled into an endless contract, the “pride’ flag has been forced to continue serving a dogmatic, ideological entity that has altered it — both philosophically and visually — to the point where what was once the sort of banner that could have complimented an ice cream shop, or a kiosk at the beach (something fun, anyway) has gone ominous, and dystopian.

And so, once again, the month of June stretches out before us — sometimes as far as September (it takes a surprising amount of rain to clear those crosswalks.) I wish that I still had an old, tattered rainbow flag buried away somewhere so that I could drag it out, shake it off, and fly it at half-mast in commemoration of all the past parties and celebrations, the heartbreak and successes, the work done on behalf of women, men, and children — naively believing all the while that what had been accomplished couldn’t be taken away. Never, in our darkest dreams, did we imagine that such theft and betrayal would be accomplished in the name of the very movement we created, and in which we felt such pride.

Brenda Brooks’ novel Gotta Find Me An Angel was a finalist for the Amazon Canada First Novel Award. Her 2019 book, HONEY, was shortlisted for the U.K. Staunch Book Prize, an award for thrillers “where no woman is beaten, stalked, sexually exploited, or murdered.”