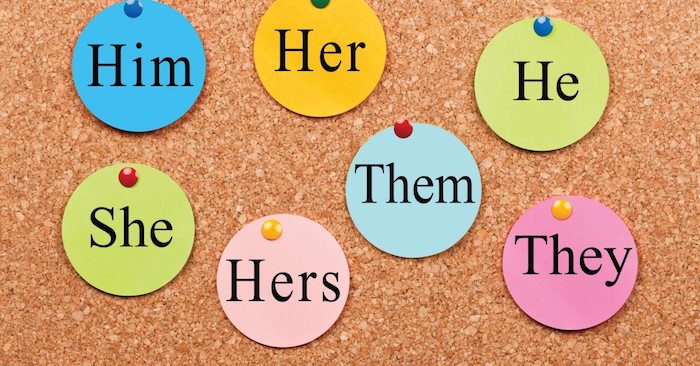 As more and more journalists, authors, comedians, researchers, scientists, media makers, [what were once/recently known as] Intellectual Dark Web-types, and Twitter users begin to speak critically and publicly about the troubling implications of trans ideology, one issue remains relatively untouched: the issue of “preferred pronouns.”

There was a very brief period of time, when I began to attempt to write on the issue of transgenderism, wherein I used what are now commonly known as “preferred pronouns.” That didn’t last long, as I engaged with gender identity ideology more deeply, as well as with other feminists who refused to accommodate the supposedly “polite” demand to refer to trans-identified people, not by their sex-based pronoun (i.e. “he” for males and “she” for females), but by the pronoun attached to the “gender” they identify as. It seemed to me that this concession had potentially wide-reaching and dangerous implications — some more immediate and some that would become apparent down the road, probably when it was too late.

This proved to be true in many ways, including that journalists are now reporting on things like male violence and sexual assault as though the perpetrators are female instead of male, on account of “preferred pronouns.” Often, the reports did not even mention that the perpetrators identified as transgender — a clue, at least, though of course one that does not excuse the lie that a rapist is a “she” with a penis.

It doesn’t stop there, of course. Athletes like Laurel Hubbard, who is competing in the women’s weightlifting competition at the Tokyo Olympics, despite the physical advantage of being male, is referred to in all media as “she,” because what is most important in sports competitions is ensuring athletes’ imaginations are publicly legitimized by reporters whose entire job is to report facts.

Government and health data about men and women will forever be skewed, as well, impacting things like funding for research and facilities, grants, programs, and education. Indeed, it becomes much more difficult to track sex-based discrimination and then address that discrimination if there is no such thing as a female or if records of such discrimination do not include sex.

Katie Herzog just reported a story for Bari Weiss’ Substack, about the way the medical establishment, of all institutions, is getting on board with the notion that preferred pronouns trump biological sex, and the very serious impact of this. She writes:

“In 2019, the New England Journal of Medicine reported the case of a 32-year-old transgender man who went to an ER complaining of abdominal pain. While the patient disclosed he was transgender, his medical records did not. He was simply a man. The triage nurse determined that the patient, who was obese, was in pain because he’d stopped taking a medication meant to relieve hypertension. This was no emergency, she decided. She was wrong: The patient was, in fact, pregnant and in labor. By the time hospital staff realized that, it was too late. The baby was dead. And the patient, despite his own shock at being pregnant, was shattered.”

But beyond all this, it is simply an affront to every single individual on the planet and their right to speak the truth, and not be forced or coerced to accept and repeat a lie. Most of you have likely read 1984, which makes this egregious crime against sanity abundantly clear, but if you haven’t, now is the time to do so.

It is not just offensive, on a personal level, to insist a woman or girl, for example, refer to an obvious male as “she” (never mind dangerous — where do our boundaries go when we have to pretend an exposed penis is not that?) but it is also entirely unnecessary. It helps no one to lie to them about their sex, which is a thing you are born with and cannot help. It is not an insult to refer to a male as “he.” Even if you don’t like “he” things. Referring to a man as “he” does not prevent him from wearing the clothes he wants to wear, growing his hair long, or even getting breast implants, if he so desires. It does, however, ensure people are allowed to acknowledge and speak the obvious truth, and avoids legitimizing the concept that one can change sex simply by announcing it so. It avoids training society to accept blatant lies, a la “We have always been at war with Eastasia,” which is essentially training to accept totalitarianism.

I realize it has been deemed “controversial” to refer to a trans-identified man as “he,” which is why those who have begun to speak out about transgenderism, now that the way has been paved by Very Bad Women, continue to use “preferred pronouns.” I imagine they do so in attempt to ensure their message isn’t obscured or derailed by the use of slurs like “he” or “she,” (and probably in an attempt to avoid cancellation, provably in vain) but in fact the result is the opposite. Criticizing trans politics and discussing the incredibly harmful impacts of trans ideology, while also going along with “preferred” pronouns, obscures the message and makes the messenger appear to either be a hypocrite or that they really do not fully understanding the implications of this big lie. It also reinforces the notion that it is controversial or offensive to use correct pronouns, which it is not.

Now, I would not demand a person destroy their entire career or put themselves and their families at risk simply to make a point, but I will not pretend as though I don’t find it dangerous and insulting that those new to the debate have intentionally positioned themselves as part of the “polite” opponents of only certain aspects of transgenderism, while they know full well what men and women are. Dangerous for the reasons I outline above (which go beyond what I’ve mentioned, for brevity’s sake), and insulting because it gaslights people, but also manages to throw everyone who doesn’t play along — those who made it easier to begin speaking openly about these things — under the bus. It pits “good” against “bad” unnecessarily and disrespects those who stuck their necks out to clear the way. It also undermines the work and criticisms of those attempting to shine a light on things like the transitioning of kids or the impacts of men competing against women in sport, who simultaneously insist it is rude to call a man “he.”

I genuinely don’t wish to pick on those who are doing very good, important work on this issue, despite continuing to use preferred pronouns. But I do want people to stop doing it. It is not a matter of politeness, it is a matter of grooming people to accept totalitarianism and abuse.