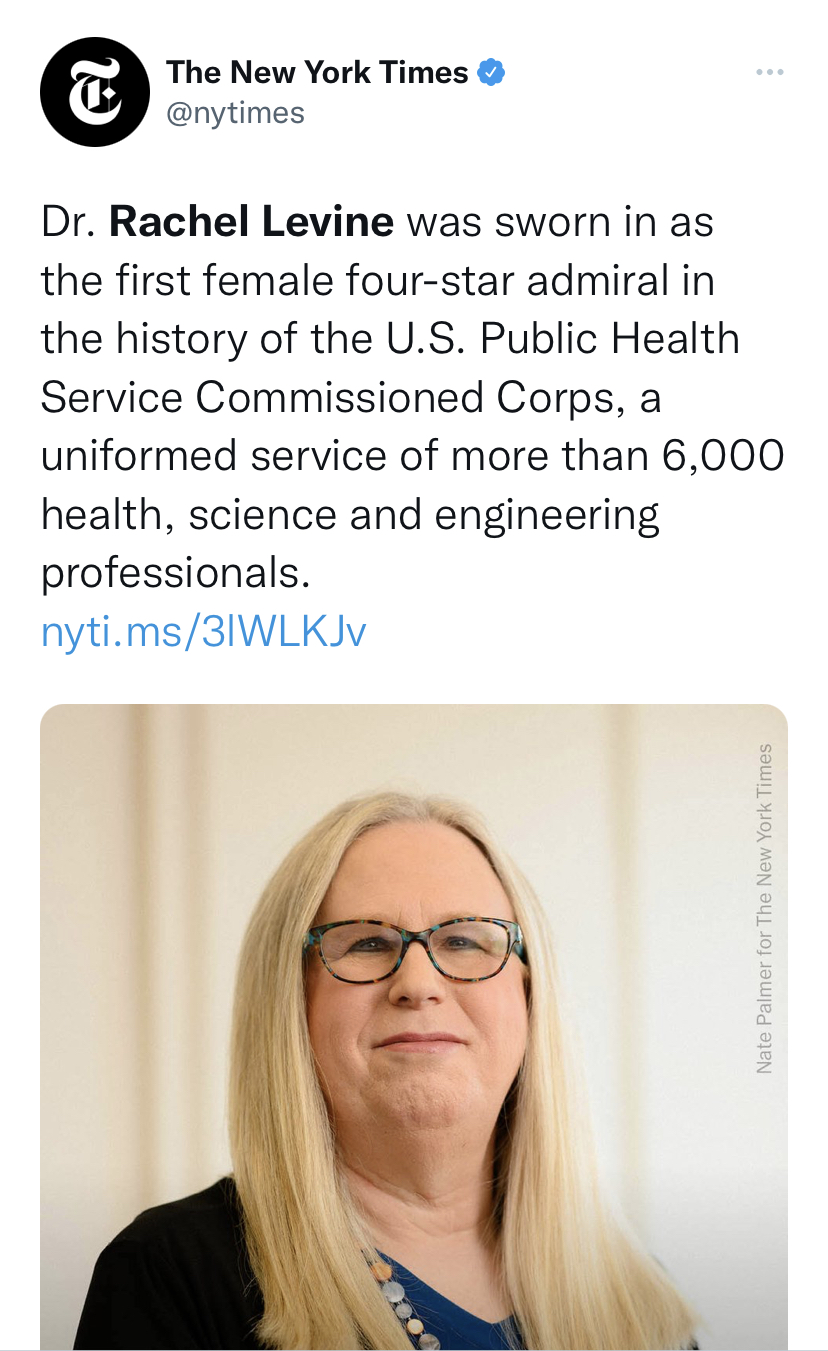 Yesterday, we witnessed a historic moment: US assistant health secretary Rachel Levine was sworn in as the first ever female four-star admiral of the Public Health Service Commissioned Corps. Wait, no. That’s not right… Let me start again.

Yesterday, America became a laughing stock, as the president elected by the good people of America (not to be confused with the bad people of America) and all of mainstream media presented the appointment of an old, fat white man (with long hair!) as admiral of the Public Health Service Commissioned Corps as a historic moment.

“Dr. Rachel Levine was sworn in as the first female four-star admiral in the history of the U.S. Public Health Service Commissioned Corps, a uniformed service of more than 6,000 health, science and engineering professionals.”

To be fair, they were only repeating what had been announced by the Biden administration, which was that “Admiral Levine now serves as the highest ranking official in the USPHS Commissioned Corps and its first ever female four star admiral.” But to also be fair, it is the job of the New York Times (and all media) to report the truth, not to simply parrot whatever the government feeds them. And, to be fair, Rachel Levine is not female and never will be. And, to be fair, everyone knows it.

What kind of planet are we living on wherein we all pretend putting yet another man into a role that has always been filled by men equates to “a giant step forward towards equality as a nation”? Or “a history-making show of diversity and inclusion”? Has there never before been a man who enjoys wearing women’s clothing in such a position? Do they screen men for fetishes before they can be appointed to admiral? Clearly they don’t screen them for having spent time as military officers, as Levine has not had any military career to speak of. I suppose his time spent in dresses makes up for his lack of service.

To be fair, political appointees are sometimes granted admiral status, though it is unclear whether or not this is determined by heroic acts like directing long-term care facilities to accept Covid patients, leading to the deaths of thousands of elderly people in said facilities, which Levine did, removing his own mother from her care home, to be safe. It is also unclear whether one’s belief that giving puberty blockers to kids, effectively preventing them from developing normally and into healthy adults, can be “life-saving” qualifies one to such a high rank.

To be fair, I don’t know much about military rankings. But I do know that adult male fantasies should not be imposed on children. And that just because an adult male suffers from mental health issues that lead him to spend an inordinate amount of time and money attempting to feminize his appearance, it does not mean children should be robbed of their health and futures. And while I have never been particularly cognizant of these kinds of appointments, I feel quite strongly that men who hold dangerous beliefs about children’s health, who are mentally unwell, and who knowingly make harmful decisions about the lives of others should not be celebrated or appointed to leadership positions responsible for responding to health crises on behalf of the federal government.

Even more troubling, though, is the fact that the President of the United States has claimed that a male is a female right in front of our eyes, and believes he will get away with it.

This should come as no surprise, as Joe Biden told Americans what he promised to do, in terms of institutionalizing gender identity ideology, and Americans voted for him anyway.

Progressive Americans rejected the Orange Menace and all those who did not support the Democrats, as well as rejecting all so-called “right wing news,” in favour of the outlets now reporting on the “first ever female four star admiral of the Public Health Service Commissioned Corps.” In many ways, Americans did this to themselves, by playing purity politics; by failing to reject a political binary maintaining that there was one Bad Guy and one Good Guy, and that an individual was also Good or Bad depending on whom he or she voted for; and by propping up progressive media institutions as legitimate despite their commitment to lies, because at least they aren’t the Bad Guys.

Is your progressive status really worth your sanity? Is a 1984-style world wherein war is peace, freedom is slavery, and males are female a fair exchange for being able to maintain that at least you didn’t vote for That Man?

To be fair, this is not about Trump being “good,” so much as it is about Biden and his administration being bad. It is not about suggesting one should exclusively subscribe to right wing media outlets either. It is about how our knee-jerk political polarization has become our destruction. And about how independent thought should take precedence over virtue signalling and blind allegiance to a political tribe that threatens to destroy women’s rights, free speech, and society as we know it.

Women are currently facing the biggest threat to their rights and dignity they have in decades. A triumph for men is being claimed as a triumph for women. We are being mocked, publicly and unabashedly. This is no time for politeness or public self-righteousness. You are not better for having avoided those outside your political tribe. It is long past time we learn from our mistakes as current or ex-leftists and ideologues, which is that doing what is right and telling the truth is not a partisan matter.

Call me Bad, but I will never vote for anyone who says a man is a woman, nor will I trust any media outlet or journalist who repeats that. I will not respect an individual who pretends they cannot differentiate between male and female or who believes those who do are “bad” or “mean.” It’s time for the truth and integrity to come first. Otherwise, I am quite certain we are doomed.