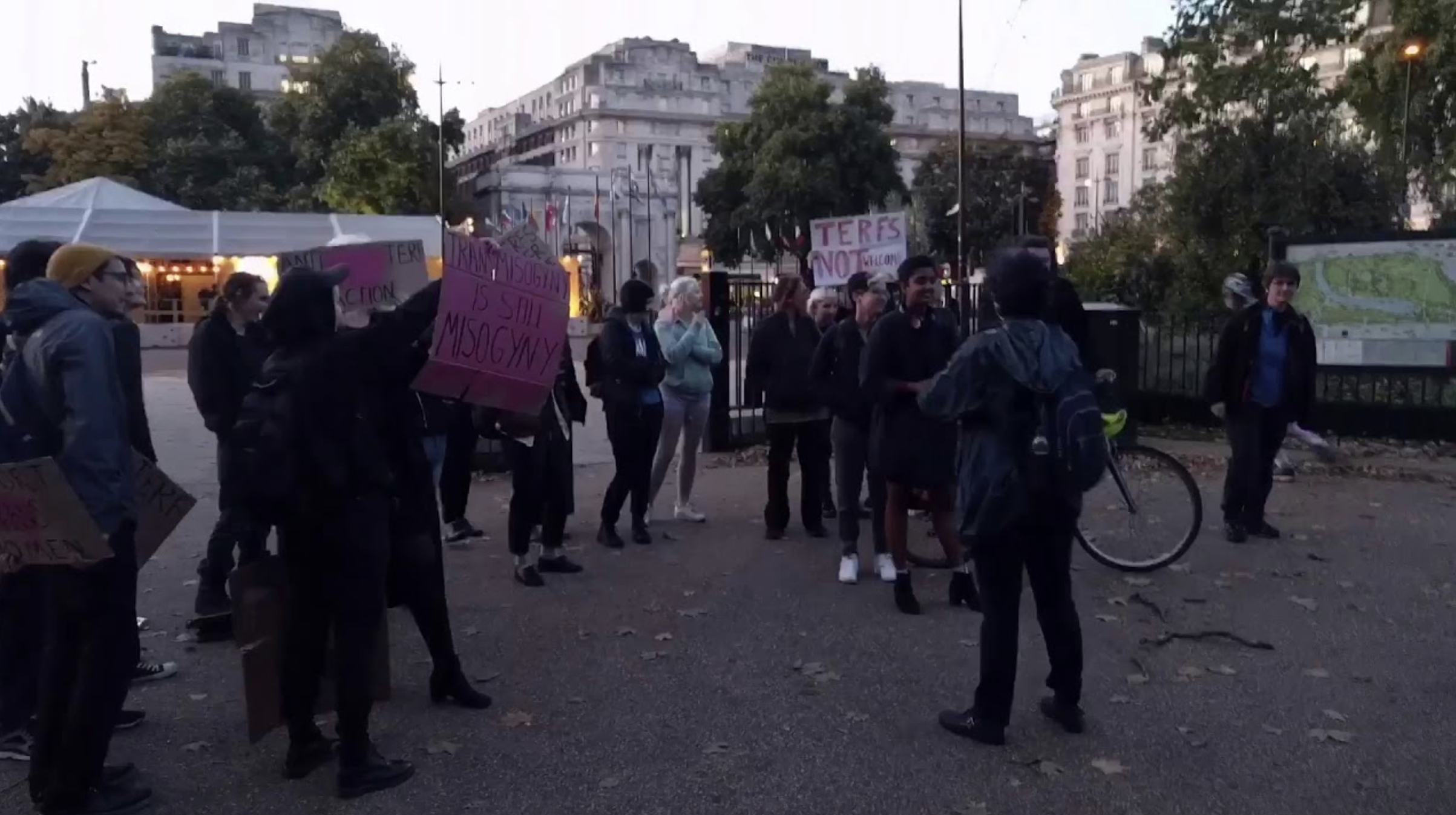 When Venice Allen decided it was time to talk about gender and the UK’s proposed Gender Recognition Act (which would update the 2004 GRA to remove the requirement of a gender recognition certificate and allow people to change their legal sex through self-identification alone), she assumed her fellow leftists would be on board. To Allen’s surprise, her Momentum group declined to host her proposed meeting, wherein she suggested people “get off the internet,” speak face to face, and debate the issues. She decided to move forward anyway, inviting an equal number of people from both sides of the gender identity debate to participate. She and her co-organizers arranged for the event, called “What is Gender,” to take place at the New Cross Learning, a community library in London, on September 13th. It wasn’t until Sisters Uncut, a British direct action group advocating for domestic violence services, caught wind of the event, that things became chaotic.

Dissapointed that @newxlearning is hosting a "debate" that will only serve to increase transmisoginy. Solidarity with our trans sisters! pic.twitter.com/gwIOoy1iWu

“[People] started harassing the library,” Allen told me. “I went in [to New Cross Learning] and heard phone call after phone call, email after email, tweet after tweet.” New Cross Learning was inundated with demands they cancel the talk. Fearing for the space and safety of those in it, the library cancelled the event on September 12th.

Allen had contacted over 20 trans activists to speak at the event, including Paris Lees and CN Lester. Though she was turned down over and over again, Allen felt “there must be someone who is prepared to defend these laws.” She was eventually able to secure Bex Stinson, the trans inclusion officer at Stonewall, an LGBT equality charity, and Claire House, the International Programmes Manager at Stonewall, to speak. But on September 4th, Stinson pulled out, having been offered vacation time at the last minute, and House pulled out two days later, saying she didn’t feel comfortable participating without Stinson present. Allen and her co-organizers had no choice but to go on with the event, without any trans activists present.

A new location was offered up — the University Women’s Club in Audley Square — but, in an effort to keep attendees safe and prevent the new venue from threats and harassment, the location was kept secret. Attendees were told to meet at Speaker’s Corner an hour before the event, where they would be informed of the new venue location.

Speaker’s Corner is a historic area in Hyde Park, where open debate and discussion have taken place for over a century, and is recognized as a space for free speech. In the 1940s, George Orwell described Speaker’s Corner as “one of the minor wonders of the world,” writing that he had listened to “Indian nationalists, temperance reformers, Communists, Trotskyists, the Socialist Party of Great Britain (SPGB), the Catholic Evidence Society, freethinkers, vegetarians, Mormons, the Salvation Army, the Church Army, and a large variety of plain lunatics.”

In the early 20th century, women’s suffrage campaigners held numerous meetings at Hyde Park as part of their fight for the vote. On June 21, 1908, 250,000 women marched to Hyde Park, where 20 platforms were erected around the park for speakers to rally for the women’s vote. “Women’s Sunday,” as it came to be called, was organized by the Women’s Social and Political Union, and was the largest political demonstration the park (and country) had seen. Paul Rabbitts, author of Hyde Park: The People’s Park, wrote that, in 1913, “the police banned the Women’s Social and Political Union from meeting in the park, but the suffragettes defiantly continued to do so.”

But considering a recent incident at the park, one wonders how far we’ve really come. A century after feminists were banned from meeting at the park, things seem to have gotten worse for women who attempt to speak about feminism in public.

Between 20-30 protestors who had gotten wind that women were meeting at Speaker’s Corner before heading on to the talk showed up to harass attendees and follow them to the venue. Some yelled “Kill all TERFs” and held signs reading “No Debate,” according to witnesses. A group called “Action for Trans Health London” had posted the location of the meeting, despite knowing some protestors were threatening violence. Miranda Yardley, one of the scheduled speakers, told me that one man who commented, “Anyone idea where/if this is happening. I wanna fuck some terfs up, they are no better than fash,” on the Action for Trans Health London Facebook page, did in fact show up at Speaker’s Corner and tried to steal Yardley’s phone.

The man, who calls himself “Tara Flik Wood,” didn’t only attempt to steal a phone. He was also allegedly involved in a violent attack on Maria MacLachlan, a 60-year-old humanist funeral celebrant for Humanists UK.

When I spoke with her over email, MacLachlan told me she had been trying to film the protest when some of the trans activists began to shout, “When TERFs attack, we fight back.” She asked them, “Who’s attacking?” At this point, MacLachlan says a young man in a hoodie tried to grab her camera. “I think he knocked it out of my hand but it was looped to my wrist. He turned back and tried to grab it again. I hung onto it.” As the two struggled, MacLachlan pulled back the hood of the man holding her camera, so onlookers could photograph his face, and another man — identified by numerous witnesses as Wood — ran over and began punching MacLachlan. Wood and a third man pushed her to the ground, where she says she was kicked and punched. The police were called, but have not yet followed up on the assault.

MacLachlan says she is “utterly bewildered at the behaviour of these young people.”

“They behaved like a brainwashed cult and seriously seemed to think that we are the haters, the bigots, the misogynists, the violent ones. But all we wanted to do was have a peaceful meeting and discussion and all they wanted to do was try to bully and intimidate us. They behaved like fascists and the irony seems to be totally lost on them. I’m sad because I’ve been a feminist for 45 years, I’ve always been left wing and I feel my generation of women and those that fought before us have been betrayed by this generation.”

The women went on to the event venue in small groups, taking different routes in order to lose the protestors who were attempting to follow them. A number of attendees said they felt “stalked” as trans activists assigned to pursue particular individuals followed them very closely. Yardley told me, “We were being intimidated, in plain daylight, by a group of people who outnumbered us by about three to one.”

Julia Long, a feminist activist and lecturer, and Yardley, who identifies as a transsexual and is critical of gender identity ideology, presented to an audience of approximately 50 people, while protestors yelled outside. The talk was cut short as police arrived at the venue and shut down the event.

In a statement following the talk, Action for Trans Health London did not apologize and stated they were “proud” of the protestors’ actions.

Since the events circulated online, numerous trans activists have not only condoned the assault, but celebrated and encouraged it. One young woman who attended the protest said, “I’m happy for them to hit her.”

I'd rather throw a punch and be accused of male violence than not and be the victim of transphobic violence. That's it. The end.

While silencing, no-platforming, and threats against feminists are not new, this violence takes recent efforts to shut down women’s speech to another level. Many of those defending the violence have predictably compared feminists to Nazis, an accusation that has been embraced by anti-feminists and men’s rights activists for decades. Indeed, it was right wing radio host Rush Limbaugh who popularized the term “feminazi” in the 90s — a man who, like these young activists, believes gender is innate and unchangeable, and feels feminists present a danger by challenging that idea.

That trans activists have adopted this comparison to Nazis with particular enthusiasm of late is intentional, contextualized within antifa defenses of violence against white nationalists. By painting feminist speech as dangerous and bigoted, trans activists have set up a political defense of male violence against women. If violence against Nazis is justified, and feminists are Nazis, violence against feminists is not only acceptable, but politically righteous. Ironically, it is the protestors themselves who have adopted practices endorsed by fascists, including censorship; misogyny; the forcible suppression of opposition and criticism; an opposition to democracy; and the use of violence or threats to build their movement, gain power, and impose their views on others.

Considering the context and history of Hyde park for women’s rights activists and social justice movements, more broadly, the violence and harassment that occurred on Wednesday is ever more emblematic. A century after women fought for their right to participate in public life, they are being silenced once again — smeared and harassed for speaking and meeting in public. Indeed, the behaviour is wholly contrary to the spirit of Speaker’s Corner, and an affront to women’s rights.

What's Current: Wab Kinew accuser alleges he threw her across the room